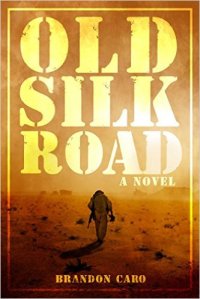 The narrator of Brandon Caro’s novel Old Silk Road is a junior enlisted Army medic named Norman “Doc” Rogers. Assigned to an Afghan National Army advisor team in Nangarhar Province, near Jalalabad, Doc is a competent medic—someone you want nearby in combat. When it comes to soldiering, that’s the quality that matters most, which is fortunate because Doc’s other human virtues are questionable. He’s irritable, arrogant, impatient, selfish, scornful, lazy, emotional, and contemptuous of authority, and none of these defects come close to being the main problem. Addicted to the opiates in his aid bag and those he can wangle from Afghans in exchange for downloaded pornography, Doc surreptitiously shoots-up on the FOB and while on mission. When not nodding out, he hallucinates wildly. Visions of the ghost of Pat Tillman and a cast of doomed Afghanistan invaders dating back to Genghis Khan’s Mongol warriors remind him of his own mortality, but Doc’s over-stimulated imagination, it turns out, is no match for the incredible reality he encounters in Afghanistan: evidence that his military chain-of-command is massively involved in an opium-and-heroin cultivation and smuggling operation.

Or maybe not, for Doc’s story is so enveloped in dream, vision, flashback, flashforward, and other narrative trickery that exactly what’s real and what’s not is often hard to determine. Clearly and defiantly, though, Old Silk Road places soldier drug use on the Iraq and Afghanistan war-writing table, much as Jesse Goolsby’s I’d Walk With My Friends If I Could Find Them asks us to think about male-on-male rape in the military. American soldiers, or at least some of them, smoked hashish in Afghanistan when they had a chance, and the few stories I’ve read about American military complicity in Afghanistan drug smuggling rings makes me think we’ve only yet heard about the culprits who have been caught. Caro writes in detail of the mechanics of shooting up and the allure of druggy bliss. I don’t know if the authority comes from experience or not, but it wouldn’t surprise me if the contemporary national issues of traumatized veterans and record levels of white middle-and-upper-class heroin addiction are more tightly entwined than we have so far considered. Old Silk Road gives these possibilities imaginative portraiture, and I for one am inclined to believe that if an author can envision something, it’s probably already happening.

True to its title, the plot of Old Silk Road is that of the picaresque travel narrative. Doc Rogers’ Embedded Training Team has decided to convoy from FOB Mehtar Lam near Jalalabad to Camp Cobra near Kabul to partake of the Camp Cobra dining facility’s awesome Thursday night Mongolian barbecue. The advisors know the “Con-Op” is a boondoggle that might get them killed, but they are infected by a screw-it-all attitude generated by boredom and contempt for their fruitless mission trying to train the hapless Afghan army. Adventures ensue along the way; Doc has in mind a quick fling on Camp Cobra with a fellow medic named Gomez, but a suicide bomber attack kills a team member named Mortin and forestalls the hook-up. Worse, or almost as bad, Doc believes the Afghan army is complicit in his friend’s death. Doc is not the most reflective of young men, as illustrated by the following passage describing his thoughts as he mans the gun on his Humvee while spaced out on morphine:

Doing my best to keep an eye on potential troublemakers, I allowed my mind to drift carelessly into the abstract. I thought about Gomez. It was just as well we were foregoing our visit to Cobra. No need to encounter the legion of Joes she was probably sucking off in the aid station after dark.

And as much as I tried to avoid thinking about it, my thoughts inevitably wandered back to Mortin. He was so young. And why had it been him up in the turret and not me? Dumb luck, I suppose.

And I thought once again about the Embedded Training Team’s advisory mission and how futile it had become, if ever it had been a justifiable use of resources. It was hard enough to get the ANA soldiers to form a line for chow or sick call or God forbid clean their weapons, let alone execute complex tactical maneuvers or practice battlefield medicine. We couldn’t even count on them to show up on time for our convoy from Cobra to Bagram some two weeks earlier. And now we couldn’t trust them not to turn their weapons on us.

Doc, and maybe Caro, too, is also not much of a literary stylist. Passages careen between overwrought and under-nourished emotional responses to events, Doc never misses a chance to write “imbibe” for “drink” and “procure” for “take,” and he lards his narrative with chunks of insider technical explanation. It’d be interesting to compare the passage above with John Bartle’s similar portrait of an aid-station cutie and a dead soldier-friend in Kevin Powers’ The Yellow Birds–the last thing Doc’s interested in or capable of is Bartle’s melancholy lyricism. As for the ANA, Doc’s opinion is lower-than-low. If only those lazy, lousy ingrates were more like their heroin-addicted and joyriding American mentors they might actually defeat the Taliban! The Taliban in fact hardly figure in Old Silk Road—who needs them when the Afghan army is treacherous enough? Doc reports a troubled relation with his father, but the Oedipal juices have not stewed long enough to transform him from angry to thoughtful, let alone allow him to see his story as comic farce. For all that, Doc is perhaps representative of many male junior enlisted soldiers, if they were permitted to openly voice their thoughts. Chris Kyle somewhere said that the ghostwriters and lawyers who helped him write American Sniper made him look not too crude, but too nice. Left to his own authorial devices he might have sounded much like Doc Rogers: the kind of guy who figures if you don’t like him it’s your problem, not his. That sentiment may be close to the true spirit of American soldiers, no better and no worse than they should be. But Doc also reminds me of the apocryphal veteran described by Karl Marlantes in What It is Like to Go to War. Ask a young vet how hard it was to kill in combat, Marlantes writes, and he’ll probably tell you it was easy. Ask him again when he’s 60, and if he’s sober enough to answer….

Kudos to Caro for replacing one traditional soldier obsession—alcohol—with a fresher, more modern, equally depressing one–drugs. Also for giving his contemporary story an historical consciousness that includes the Russian, British, and Mongol failed takeovers of Afghanistan. I also like how Caro incorporates Pat Tillman—the doomed patron saint of our collective mishap in Afghanistan—into a personalized story of deployment tragedy. As an ex-Afghanistan ETT myself, I enjoyed Caro’s descriptions of places and events I too have experienced. My regard for the mission was far higher than Doc Rogers’, who hates it and thinks it is stupid. I was an old officer, though, and so were most of the other advisors on my team. I’m sure the mission baffled and the Afghans rankled our junior enlisted members just as much as they do Doc.

My real point of connection with Old Silk Road, however, is literary, not military. A few years back, I wrote a PhD dissertation on pre-Civil War popular fiction, the stuff everyone was enjoying except for the few who actually read Melville and Hawthorne in their time. Reading Old Silk Road brought back in spades styles, themes, and characters I encountered in early American stories. The hyper-skittishness about honor and slights exemplified by the berserk protagonists of novels by Charles Brockden Brown and John Neal. The picaresque road trip of Hugh Henry Brackenridge’s Modern Chivalry. The odd ruptures of the time-space-body continuum and racial paranoia of Robert Montgomery Bird’s Sheppard Lee. The sensational booze-induced hallucinations of temperance author T.S. Arthur’s Six Nights with the Washingtonians and Ten Nights in a Bar-Room. The exposé of extravagantly sinister and corrupt power à la George Lippard’s The Quaker City. Read Old Silk Road alongside Paul Gutjahr’s anthology Popular American Literature of the 19th Century and David Reynolds’ Beneath the American Renaissance if you don’t believe me. Judging by the fiction, people circa 1835 walked around half-addled by bad water or bad whiskey. Old Silk Road has the same manic, crazy-quilt energy. It’s not interested in propriety or what’s come before and it’s capable of anything. Alarming as it is to think of the drugs that are doing the damage today, especially against the backdrop of military duty, in the great war-writing game Old Silk Road asserts the value of raw idiosyncrasy in the face of more mannered and nuanced approaches.