Three recent works of fiction suggest that war in Iraq was not so much an event or set of events, but a disease that infected its participants and ruined their lives. Hilary Plum’s Strawberry Fields is her follow-up to her 2013 novel They Dragged Them Through the Streets (which I review here) and her 2016 book of essays Watchfires (mentioned here). Like Plum’s previous two works, Strawberry Fields’ interest is the rancid state of American society and global geo-eco-politics, in which violence, fear, militarism, crime, natural and man-made disaster, and constant surveillance overwhelm optimism, good-nature, civility, and civic feeling. War in Iraq figures in each of the works, but mainly as a breeding ground for and a corollary manifestation of rot at home. In Strawberry Fields, five Iraq veterans are found murdered; the rest of the novel details a strange alliance between a journalist named Alice and a detective named Modigliani as they search for clues to the murder in war crimes committed by contractors to whom the soldiers were connected overseas. The story is related through the perspective of multiple characters in a non-linear manner, with contextual clues scant and little sense of plot or closure. Intermixed with the main storyline are other chapters depicting harrowing scenes of human, animal, and environmental vulnerability, set in places as diverse as New Orleans after Katrina, a refugee camp in an unnamed country, a neglected zoo, a field ruined by pesticides. The textual atmosphere is sometimes lyrical but mostly clotted and bristling, so Strawberry Fields is not an easy breeze for casual readers. If, however, you, as do I, might like a novel that doesn’t just describe our malevolent times but replicates their dizzying and dismaying profusion of bad news and hostile intentions, sans happy-face band-aids, then Strawberry Fields is for you. 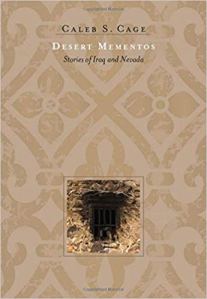 Caleb Cage’s dedication to Desert Mementos: Stories of Iraq and Nevada, his book of nine linked short services about war in Iraq and before and afterwards in Nevada, is telling. Written “For Brooke” (I presume Cage’s wife), it goes: “you are the happy story you couldn’t find on these pages.” Brooke wasn’t wrong, for I don’t think I’ve read a work of fiction about Iraq or Afghanistan that is so relentlessly dour. The protagonists of the stories in Desert Memories—soldiers of different ranks in a Nevada National Guard infantry unit—just seem miserable. The war is hopeless, the chain-of-command are fools, Iraq and Iraqis are disgusting, the soldiers screw each other’s girls, the women in theater and back home are treacherous, and the relief from it all—alcohol—is a one-way fast-track to ruin at an early age. Something like the true voice of the disaffected junior enlisted soldier and junior officer emerges in full throttle over the course of Desert Mementos. Convinced of their own superior judgment and self-righteousness, the soldiers seethe as the increasing apprehension that they now hold in contempt the military they voluntarily joined gnaws at their self-respect. What they hoped would be a transformative experience has turned out to be joyless and purposeless and they suspect that they have been made worse, not better, by Army service. Silently blaming themselves for their predicament is intolerable, however, so begins endless bitching and acts of petty insubordination directed at a military they now loathe. For all that, Desert Mementos has many virtues, or maybe all that is its virtue, or at least its point. I’ll trust there are still a lot of highly-motivated, good-natured soldiers eager to do well out there, but there are those like the soldiers described in Desert Mementos, too, and the military has only itself to blame for it. As someone who has led a lot of vehicle “CONOPS,” I liked Cage’s depiction of them in “Ghost Patrol.” As someone who has pulled many guard-tower shifts, I appreciated Cage’s portrait of the same in “Desert Island.” As someone who knows all too well the inside of a Tactical Operations Center (TOC) and built many a PowerPoint presentation (and written about them here), I loved “This Is Not Burning Man.” As someone who had a vexing professional relationship with a female embedded journalist, I could relate to “Proxy War.” As someone who has had some memorable experiences driving through Nevada, I thought “Tonopah Low” was right on-point. And as someone who was witness to the killing of a fellow truck crew-member, I’ll testify that a similar event described in “Soldier’s Cross” spoke to me hard and true.

Ahmed Saadawi’s Frankenstein in Baghdad tells the story of a monster created out of human body parts that wreaks vengeance on Iraqis who are complicit in criminal activity—usually killing—directed against fellow Iraqis. The novel’s least interesting parts are those that give voice to the monster’s consciousness or attempt to explain it through authorial third-person description. Apparently, the modern-day Frankenstein represents a cosmic manifestation of the violence begat by violence, a self-fulfilling prophecy of ever-expanding retribution for past sins and crimes, amplified by the collapse of humane civil society in Iraq as a result of first Saddam Hussein and then the American invasion. These portions of Frankenstein in Baghdad ring kind of strident and over-determined while emitting confusing signals whether they are serious or comically fanciful. Much more winning is the rest of the novel, which consists of accounts of everyday Iraqis—the 90% who wouldn’t think of killing anyone under any circumstances–whose lives consist of trying to survive the violence instigated by the ruthless, selfish, and bloody-minded among them. The leader of the advisor team I replaced in Afghanistan told me upon arrival that “Afghans are reasonable decision-makers, but they are worried everyday about two things that we are not: that they might be killed at any time, and that they have to ensure their family’s future welfare.” That insight seems to also be the animating force for the characters in Frankenstein in Baghdad, who must deal with the chaos that tyranny, war, and most-of-all poverty have beset upon them. Living by their wits and extremely aware of the precariousness of their lives, Saadawi’s Baghdadians demonstrate a resiliency, ingeniousness, and humanity that makes us far-softer, far-safer Americans look like rigid, selfish dullards. Their stories both heart-breaking and inspiring, Saadawi relates them in a way that, against all odds, seems light-hearted, jocular, even madcap. How Iraqi fiction about the war can be so zestful, while American fiction strikes such bummer notes, is one of the wonders of literature and mysteries of life.