Last week I was fortunate to hear masterful short-story war authors Phil Klay and Hassan Blasim read in separate events to West Point cadets, faculty, and interested community members.  Both Klay and Blasim were eager to share their enthusiasm for literature and what they have learned about war for the benefit of future officers.  Both, I think, were pleased to find receptive audiences—Blasim, no fan of Saddam Hussein but equally appalled at the destruction of Iraqi civilized, artistic, and intellectual life in the wake of his displacement by American forces, and Klay, a Semper Fi Do or Die Marine in the heart of the belly of the Army beast.  Both read powerfully, both were charming raconteurs in informal discussion, and both were inspirational about the necessity of imagination and art to help people—future Army officers—understand the complexity of war and the human experience of it.  Hats off to my bosses and colleagues at West Point who have worked hard to make contemporary war artists and writers relevant to the education of cadets.

This week, Klay and Blasim read together in New York City, where I took this picture of them together:

Also this week, I participated in two Vassar College classes that explored the Iraq War through fiction and photography.  The class had read David Abrams’ Fobbit, and now we were privileged to have Abrams join us by Skype—shades of deployment!—to discuss his black humor vision of Operation Iraqi Freedom.  Abrams has written about the experience in his blog The Quivering Pen and even included two wonderful student response papers to his novel.  The following class, the professor, Dr. Maria Hoehn of Vassar’s History Department, brought in Michael Kamber, a photographer who has covered both Iraq and Afghanistan for the New York Times.  Kamber has recently published an important and fascinating book called Photojournalists on War:  The Untold Stories from Iraq.  In it, Kamber compiles hundreds of photographs too graphic for military censors and media editors and published them along with their photographers’ accounts of their taking.  Kamber is adamant that photographs can shape consciousness and politics and he is vehement in his indictment of a military-media complex that has restricted, censored, and otherwise blocked distribution of the photographs that would truly inform the American public about the Iraq War. 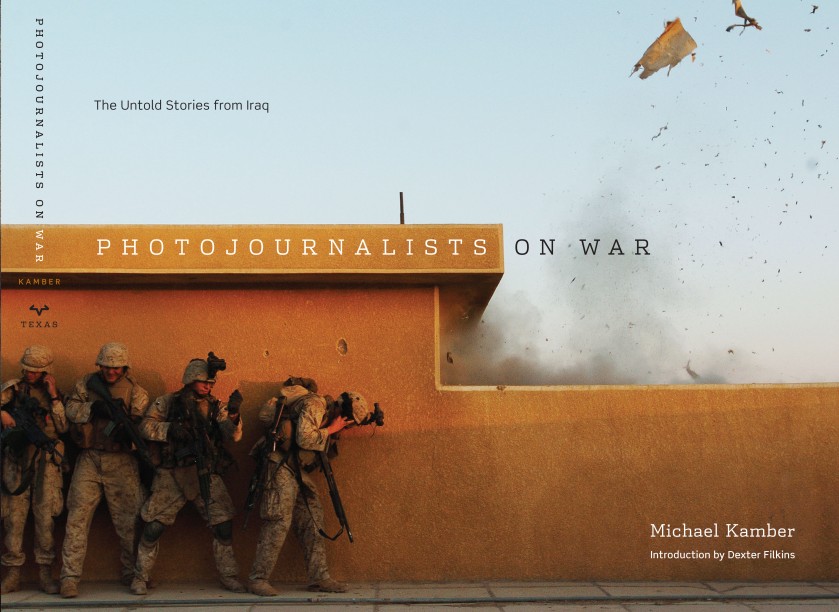 This swirl of words and impressions came as a series of publications and events brought veterans and veteran fiction into high relief.  George Packer’s glowing assessment of the contemporary war lit scene in the New Yorker was great, but its fulsome praise was undercut by Cara Hoffman’s  indictment in the New York Times that that same scene has been inhospitable to women’s first-person accounts of war.  Next came the news of yet another shooting rampage by a veteran.  One could sense public patience with vets draining away with each new article; we who were once heroes are in danger of morphing into monsters.  As if that wasn’t bad enough, the New York Times ran an opinion piece that confidently asserted a causal relationship between military service and membership in white supremacist groups and then an article that made the current generation of West Point cadets sound like bloodthirsty ingrates for their admission of regret that they would not probably not see combat in Iraq or Afghanistan.

In the midst of these gloomy accounts came a personal triumph, but one whose relevance to contemporary war literature I’m still trying to figure out. The current Maryland Historical Magazine features an article I wrote about early American novelist John Neal.  Neal is unknown to most, but he authored seven novels between 1817 and 1823–a time when very few other American writers took novels seriously.  Neal obviously did.  He called novels “the fireside biography of nations” and said, “People read novels who never go to plays or to church.  People read novels who never read plays, sermons, history, philosophy, nor indeed any thing else.”  Novels, for Neal, were places “where imaginary creatures, invested with all the attributes of humanity, agitated by the passions of our nature, are put to the task of entertaining or terrifying us.”  Ominously, he wrote that readers were excited by immoral and criminal characters more than virtuous ones.  Speaking of two popular authors of the time, Neal claimed that “all their great men are scoundrels….  their good men are altogether subordinate and pitiably destitute of energy and wholly without character.”  Be that as it may, Neal urged that all writers “write fiction–let them put out all their power upon a literature that all may read, century after century–I do not mean quote, and keep in their libraries, but read.”

Is any of this true, then or now?  Is any of it important?  Tomorrow I travel to Wesleyan University in Connecticut to participate in a “Writers on War” panel with Roy Scranton and Joydeep Roy-Bhattacharya.  I’m interested to hear what they and our audience have to say.  And what about David Abrams?  Michael Kamber?  Phil Klay?  Hassan Blasim?