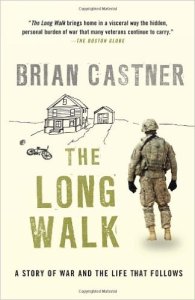 …aren’t so lazy and hazy if you live in the New York City area, where the artistic and intellectual processing of the wars in Iraq and Afghanistan affords almost too many events to absorb. The highlight of the summer is the staging in Saratoga Springs (180 miles up the Hudson River from Manhattan) of an opera based on Brian Castner’s memoir The Long Walk. Castner probably didn’t see it coming, but in retrospect it’s not hard to recognize his memoir’s operatic potential. Castner’s record of his tours in Iraq as the head of an Air Force Explosives Ordnance Disposal detachment and his troubles readjusting to civilian life afterwards is fine in its particulars—in a perfect world it would be more popular than American Sniper. It’s got more harrowing combat scenes, for instance, as well as better descriptions of specialized military training and more honest, reflective, and generous portraits of how difficult redeployment can be. But what really elevates The Long Walk is Castner’s imagining of his life in terms of darker, larger, may I say mythic forces that imbue existence with cosmic significance. In particular, Castner describes what it means to be overcome by “The Crazy”—those oh-fuck moments after war when you realize just how screwed over combat and danger have made you, no matter how normal you appear or try to be. Castner’s richly-situated exploration of the larger-than-life forces that envelop him are I’m sure what inspired the opera producers Jeremy Beck and Stephanie Fleischmann.

More prosaic, but still exciting, war-lit readings are taking place within the city itself. Words After War impresarios Brandon Willitts and Matt Gallagher are sponsoring not one, but two series of readings. Monthly events at The Folly, a Greenwich Village bar partly owned by Gallagher, have featured local veteran and military-themed writers, such as Mariette Kalinowski, Kristin Rouse, and Jake Siegel, as well as civilian authors, reading unpublished and recently published work in an intimate setting. Words After War also co-sponsors a second set of readings, called Danger Close, in conjunction with New York University English professor Patrick Deer. Deer is part an academic consortium named the Cultures of War and Postwar Research Group and the author of Culture in Camouflage, a study of literature written in Britain during World War II, so it’s great that he has now turned his attention to contemporary American war writing while helping showcase its authors in intriguing pairings with compelling moderators. One Danger Close event featured Phil Zabriskie and Jesse Goolsby in conversation with Lea Carpenter, and a second had Myra Jacob hosting authorial collaborators Gavin Kovite and Christopher Robinson along with August Cole and P.W. Singer. And as if that weren’t enough, the energetic and innovative Willitts and Gallagher have announced a third event, a one-off called Writing War, to take place July 30 at the Brooklyn Historical Society and featuring Phil Klay, Matt Gallagher, Sara Novic, and Maurice Decaul.

Words After War is by far not the only game in New York town, either. War author and Restrepo filmmaker Sebastian Junger, for example, has been hosting readings featuring veteran authors and war journalists at HIS bar-restaurant the Half-King and elsewhere in the city. Earlier in the summer, Arts in the Armed Forces, a vet-friendly organization founded by actor and ex-Marine Adam Driver, helped promote an off-Broadway play by Daniel Talbott titled Afghanistan, Zimbabwe, America, Kuwait. Alex Mallory, who has staged at least two plays about war in Iraq with her troupe Poetic Theater, is back July 27 with a staged reading of her work There Are No Camels in Beirut, about conflict in that strife-torn city in 2006. Invitations to events and announcement of new programs by writing collectives such as Voices From War and the NYU Veterans Writing Workshop arrive weekly if not daily. And in the most out-of-the-blue way possible, I’ve been consulted by the event-designers of Gigantic Mechanic, a Brooklyn arts initiative currently developing an interactive theater experience called Hearts and Minds, which will allow audience members to role-play members of an infantry squad on patrol in Iraq. That’s not quite as cool as having an opera made of your life, but I’m flattered to have been asked for input.

So that’s New York for you, creatively and endlessly engaged and productive. I hope things are as busy and interesting as you want them to be wherever you are this summer.