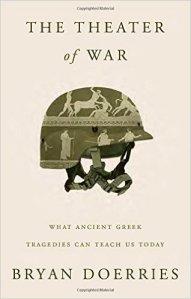 So this is interesting. A classics scholar named Sarah Ruden published on a website called Books and Culture: A Christian Review a scathing review of a book called The Theater of War: What Ancient Greek Tragedies Can Teach Us Today. On another website, Vice, Iraq veteran Colby Buzzell published a glowing review of the same book and included a flattering interview with its author Bryan Doerries. Vice is decidedly not a “Christian Review,” but, war, not religion, is the issue here.

The Theater of War is an off-shoot of a theatrical project of nearly the same name. Formed by Doerries to address battle-related trauma, Theater of War the dramatic project stages readings of classic Greek plays such as Ajax and Philoctetes whose plots feature military heroes in exile and anguish in the years after war. Theater of War productions feature veterans and, sometimes, famous actors, in the lead parts. After the readings are over, Doerries moderates a question-and-answer session that allows cast and audience members to discuss the plays’ relevance to veterans of Iraq and Afghanistan and their difficulty reintegrating into civilian society. The idea is that the plays concern themselves with the psychological damage of war in ways that can be helpful to veterans suffering from PTSD, as well as bringing military and civilian audience members together in dialogue. Theater of War has proven popular, and performances have been staged on several military bases, as well as on many college campuses. Upcoming performances on October 27 and 28 are set for the Guggenheim Museum in New York City.

Ruden, however, is not impressed by The Theater of War. In her review, titled “Art for All of Us: Greek Tragedy and War Veterans,” she offers a few token compliments that praise Doerries’ translating and directing ability, and then switches her critical selector switch from “safe” to “full automatic” and begins engaging targets left-and-right. Ancient Greek tragedy, properly understood, according to Ruden, has little to do with war-related trauma. The Greeks themselves didn’t understand the concept, nor did they ever single out veterans as objects of special social concern who needed public coddling. Jonathan Shay, the psychiatrist who popularized the idea that Greek classics could teach us how to heal veterans with psychological and moral injury, had it all wrong. So does Doerries. The whole belief that “storytelling” can be therapeutic is preposterous. The misuse of art for utilitarian, didactic purposes is a disgrace. Doerries would be better off staging Greek plays for general audiences, to include veterans, and drop the canard that the plays speak meaningfully specifically on behalf of veterans or help bridge the civil-military divide:

“But not only does [Doerries’] set-up keep really glorious adaptations away from the mainstream; it seems apt to deprive the tragedies of the most plausible benefit they could have for the traumatized, which is the benefit of universally shared beauty and meaning. We already ghettoize veterans, not to mention the dehumanizing of and profiteering from prisoners and the terminally ill. ‘Here’s a piece of art designed just for you in your pitiable state’ seems at best a pretty condescending prescription….”

In his review titled “How Ancient Greek Tragedies Can Help Veterans Deal With PTSD,” Buzzell describes approaching the assignment to examine The Theater of War with a skepticism much like Ruden’s, which he expresses equally forcefully, though in the infantryman’s idiom for which he is known:

“To be honest, when I first received this book, I was like, Are you fucking kidding me? As someone who’s witnessed the theater of war up close and personal as an infantryman in the United States Army (Iraq 2003–4) and has lived to tell about it, I found the whole concept to be a bit absurd. I know there’s all sorts of crazy shit out there beyond the conventional VA-prescribed prescription medication and/or therapy sessions to help those returning home after war “adjust”: yoga, nature hiking, scuba diving, filmmaking, horseback riding, tai chi, herbal and dietary supplements, group drum circles, art projects, meditation, ballet dancing, getaway vacations, bright-light therapy, music therapy, companion dogs, medical marijuana, acupuncture, and other such things. But now there’s this bright idea of exposing soldiers to Greek tragedies that were written 2,500 years ago as a way to help those struggling with readjustment issues and PTSD? Get the fuck outta here.”

But Buzzell is also open-minded and curious, in addition to being penetrating and eloquent, and he tells us that after completing The Theater of War he saw a lot in it to like. Buzzell relates especially to Doerries’ descriptions of Ajax, who as Buzzell puts it, “returns home from war and feels as if he’s been betrayed, gets depressed, snaps, goes on a blind killing spree, then kills himself with his own sword.” Yikes! Presumably Buzzell appreciates something Doerries explains about how Ajax might have been saved from himself and restored to health and happiness, but beyond recommending that Theater of War be read by a “larger audience,” Buzzell doesn’t go into much detail about exactly what excites him. The interview with Doerries, however, generously allows the author-director to explain for himself his goals, and more importantly, what he has observed after staging dozens or hundreds of performances of Theater of War. Buzzell’s questions are more interesting, in fact, than Doerries’ answers, but Doerries acquits himself well—modest about making great claims for Theater of War’s scholarly or medical legitimacy, he defends his project on the empirical grounds that audiences have been moved by it and many veterans in addition to Buzzell claim to have been helped by it.

A curiosity of this critical duel, such as it is, is that it seems neither Ruden nor Buzzell have seen an actual performance of Theater of War. I have, and came away from the experience in ways that make me sympathetic to both reviewers (I have not yet read Doerries’ book). On this blog, I have been skeptical of contemporary war lit’s propensity to identify too readily with classic Greek literature, but I certainly welcome chances to view modern adaptations of ancient myths and plays as they come along. Aloof and analytical as I am, though, I was determined to resist notions that the town-hall-cum-Dr.-Phil atmosphere of the performance Q&A meaningfully connected Greek warriors and modern soldiers, or being seduced by the idea that I was participating in an event that channeled the spirit of Athenian dramatic festivals. But the large audience with whom I sat had few such qualms. They responded to the reading with vigorous applause and energetic participation in the post-reading discussion. Even more telling, the specific group with whom I watched Theater of War—a group of military academy cadets who included several deployment veterans—were also enthralled. On the drive home from the theater, we stopped at a McDonalds in the middle-of-nowhere and after eating our meals (a bus-driver’s discount for me for bringing in the group!), we talked late into the night about the performance and how it related to modern war, soldiering, and military leadership. It was as spontaneous and free-flowing a conversation with officers-to-be as I’ve ever been part of, and much of the credit goes to Doerries, Theater of War, and the power of Greek tragedy.

Anybody else think it would be a great idea to invite both Ruden and Buzzell to the upcoming productions of Theater of War at the Guggenheim?

Bryan Doerries, The Theater of War:  What Ancient Greek Tragedies Can Teach Us Today.  Knopf, 2015.

5 thoughts on “Theater of War, Battle of Words”