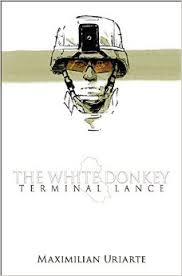 I’ve haven’t read a bad word yet about Maximilian Uriarte’s graphic novel The White Donkey, and you won’t find one here, either. It would be hard to top Charlie Sherpa’s review of The White Donkey on Red Bull Rising, so I’ll keep things short. The story of a young Marine, morose and purposeless to begin with, disillusioned by the military in general and traumatized specifically by combat in Iraq, The White Donkey plot recoups many scenes and characters now commonplace in contemporary war writing. The protagonist, Lance Corporal Abe Belatzeko, is a listless and adrift young man who had hoped that the Marines might provide the purpose and motivation he couldn’t muster as a civilian. That doesn’t happen, however, as Abe finds life in the Marines mostly dull and senseless, frequently miserable, and rarely inspiring or rewarding. His lack of gung-ho spirit is quickly perceived by his peers and sergeants, who either are “all in” or better able to “fake it until they make it.” As The Valley author John Renehen (an Army veteran) described the Semper Fi Do or Die ethos to me in an email, “I remember realizing in Ramadi that the typical Marine is not some jarhead muscle man but a clean-scrubbed eager-beaver kid who looks like he’s 15 and just wants you to tell him to do something, anything, so he can do it 110% and have you tell him he did a good job.”

Abe can’t muster that level of commitment, and foolishly he thinks that his constant complaining and emotional distance constitutes a worthy critique of USMC dysfunction. When his best friend Garcia rips him a new one for his slacker attitude, however, Abe realizes how off-putting his belly-aching and ass-dragging have become. He resolves to get his act together, but unfortunately, things completely unravel when his truck hits an IED while on mission and Garcia is killed. The IED strike occurs as the men are singing along to The Killers’ “All These Things That I Have Done”—“I got soul, but I’m not a soldier”—the chant, known by all who deployed to Iraq and Afghanistan, getting very near to the heart of contemporary civ-mil split identity: willing to wear the uniform, willing to go to war, but refusing to accept total indoctrination into the warrior way asked for by service, and in fact commenting ironically on the incongruity of hapless boy-men, raised on Call of Duty and South Park, now armed to the teeth and on behalf of their nation heading into battle with ruthless Islamic radicals. The disaster that befalls Abe precipitates further decline and provides proof positive of Stacey Peebles’ articulation of the defining story line of Iraq and Afghan War memoirs and narratives: a young man who trusts that his upbringing and his branch-of-service will protect him from the worst of war, only to learn the hard way how badly he has miscalculated.

Uriarte’s majestically simple narrative and drawings distill stock war story elements and artistically re-invigorate them. Above all, he makes Abe worthy of sympathy, in contrast to some other portraits of alienated veterans who come off as unlikeable louts. Frankly, many similar narratives, of which there are by now dozens, seem crude and tedious in comparison, though they try much harder, while The White Donkey storyline effortlessly pulls readers forward, even as they may be tempted to linger on each page to marvel at Uriarte’s ability to portray story, scene, and character through image. Perhaps the graphic novel–unable to render complex adult interiority and extended authorial commentary–is a form ideally suited to portray a young man’s experience of war and redeployment. But that notion shortchanges Uriarte’s achievement, to say nothing of the interior life of young men. A veteran of tours in Iraq as both an infantryman and a combat artist, Uriarte also possesses a degree from the California College of Arts, a potent blend of experience and education. For years Uriarte has authored the cartoon strip Terminal Lance, which features sardonic looks at military life from the viewpoint of fictional junior enlisted Marines, including Abe and Garcia. Terminal Lance is excellent, but only hints at the imaginative enhancements Uriarte has wrought on the cartoon’s characters, subjects, themes, and sensibility in The White Donkey, as if its larger canvas sought to expose the limits of junior enlisted sarcastic wise-assery. What The White Donkey forgoes in terms of the Terminal Lance cartoon’s humor, it more than makes up for on the strength of its strong storyline, poignant perspective, and evocative artwork. 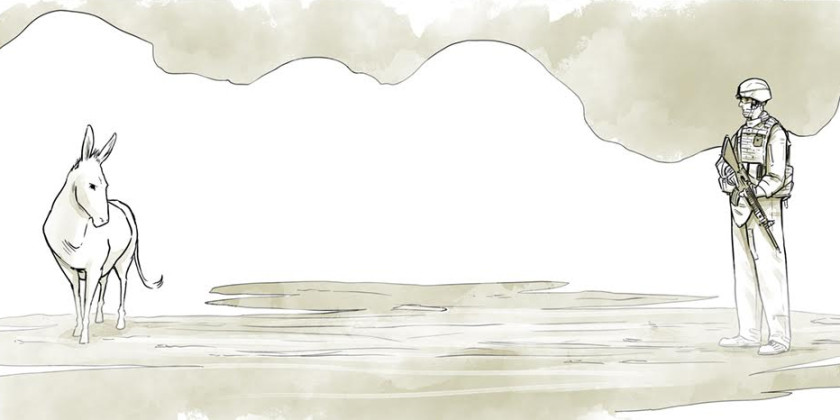