“Our ideas about the war were the war.” -Will Mackin, “Kattekoppen”

“Lieutenants write the histories of their wars.” -Gore Vidal, Burr 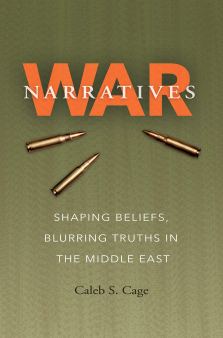 Caleb S. Cage’s War Narratives: Shaping Beliefs, Blurring Truths in the Middle East, published in 2019, is a most curious, almost surprising, arrival on the war-writing scene. Organized around an easy-to-grasp conceit, War Narratives argues that true understanding of America’s twenty-first century wars, particularly Iraq, has been clouded by competing story-like interpretations of what was supposed to happen, what actually happened, why what happened happened, and why any of it matters. Analytical and historical in approach and arriving at a time when war-mil-and-vet writing seems stuck on a limited number of predictable tracks, War Narratives offers striking relief from the parade of first-person memoirs, biographical accounts, and journalistic commentary on topical events. Though not perfect in its argument or its argument’s development, War Narratives succeeds by being provocative and inspirational, and, best of all, by being mostly right.

War Narratives’ thesis that understanding of the war has taken the form of understanding stories about the war is in some respects obvious—everyone has heard canards about “controlling the narrative” from the mouths of generals, politicians, and journalists—but Cage takes the nostrum seriously and unpacks it in a number of interesting and illuminating ways. Each chapter is organized around a simple-but-sturdy rubric: examination of two competing narratives (some of which seem more like ideas or beliefs than stories, but no matter) about Iraq and Afghanistan. Chapter One begins things by analyzing competing explanations for extremist Islamic jihad offered by Al Qaeda and ISIS. The virtue in starting this way is that two of America’s arch enemies publicly proclaim differing “official” narratives. This fortuitous event allows Cage to dissect clearly-enunciated, highly-visible examples of narrative construction and dissemination before turning to Western narratives that coalesce in more nebulous ways at the level of public opinion, political positions, media debate, book battles, and ideology.

Chapters Two through Five examine key aspects of twenty-first century American warfaring politics and strategy in a similar pattern. In each chapter, Cage identifies first a dominant, conventional, or accepted interpretation of events and then undermines it by considering an alternative version not generally given enough credence in Cage’s estimation. Chapter Two, for example, takes issue with the idea that the decision to go to war in Iraq and Afghanistan was a matter of “choice” by President Bush, rather than a more complicated, wide-ranging accretion of events and processes that involved many players. Chapter Three argues against the idea that President Bush was just a “cowboy” enamored of tough-guy talk and action. Instead, Cage demonstrates, President Bush was also consumed by the idea of making war as pain-free and risk-adverse for soldiers and the nation as he could. Chapter Four counters conventional belief that the chaotic Reconstruction “Phase IV” of Operation Iraqi Freedom was neglected by war-planners and leaders such as General Tommy Franks. Cage proposes that the real problem was not neglect, but too much uncoordinated effort, and the real failure was inability to synchronize competing plans and planning agencies to maximum effect. Chapter Five explores debates about the value of COIN strategy, the Iraq War “Surge,” and the cult-like preeminence given (for a while) to General David Petraeus as the savior of a war gone-very-badly-wrong. Here, Cage goes beyond description of competing sides to make a larger, more trenchant argument: debates about COIN, the Surge, and General Petraeus had more to do with domestic political posturing than people and actions on the ground in Iraq. Not that things on the ground didn’t actually happen, but they were interpreted through competing rhetorical frameworks that advanced pre-confirmed political beliefs and agendas.

All good, so far, and a nice trip down memory lane to revisit events that already seem like they occurred a million years ago. The last three chapters of War Narratives, however, are more germane to Time Now’s interest in the artistic representation of war, the human experience of war, and literary analysis. Chapters Six through Eight identify dominant motifs in the stories that soldiers actually tell about themselves in oral histories, memoirs, and fiction. Chapter Seven, on oral history, describes a body of soldier stories that escape characterization of military men and women as either “heroes” or “victims.” Chapter Seven, titled “On Chickenshit,” asserts that contempt for military bureaucratic rigamarole, both in the way it affected efforts to fight the enemy and in the way it defined the military’s own internal processes, as the animating energy in war blogs and memoirs such as those by Colby Buzzell, Matt Gallagher, Christopher Hartley, and Benjamin Tupper. Cage is not wrong, at all, and his most salient point in War Narratives, for my money, is made in this chapter. Describing the way that contempt for military chickenshit, horseshit, and bullshit reflected particularly in Iraq and Afghanistan soldier narratives, he writes:

In these wars, instances of chickenshit evoke a sense of dishonesty often used in political rhetoric to persuade, and political cowardice that allowed for a poorly planned invasion and the belief in a painless war, all resulting in a risk-averse approach to combat. And because those who served in the military during these wars did so voluntarily, it helps explain why those who endure chickenshit in the military can complain about, but how they do not see themselves as heroes or victims for doing so.

There’s much to unpack in the above quote, but to comment on just two aspects: characteristic here is Cage’s attention to the importance of the all-volunteer military in shaping the peculiar nature of war narratives in the twenty-first century. In almost every chapter, the fact that a large unknowing populace and a small cohort of military volunteers exist on opposite sides of a chasm is the driving force for the creation of stories told on each side of the chasm about those on the other side. In specific regard to soldier narratives, Cage puts his finger on the contempt and rage so prominent in war narratives, which is directed at every member of the chain-of-command above the rank of lieutenant for constructing such an unsatisfying war and military experience for the junior enlisted and junior officers who write the bulk of soldier-narratives. And yet, as Cage explains, the authors know they volunteered, and so while in suffered more-or-less silently what they feel more liberty to vehemently vent when out.

As Johnny Rotten famously proclaimed from the stage at the last Sex Pistols’ gig: “Ever get the feeling you’ve been cheated?” For me, that’s pretty much the author’s attitude in many memoirs written by contemporary veterans.

Chapter Eight turns attention to war fiction as a war-writing corpus that not only honestly proclaims its identity as “narrative” but which offers more-worthy counter-stories to the self-serving and politicized tales examined in War Narratives’ early chapters. This line-of-thinking is music to my ears, though presented a little uncritically by Cage:

Those seeking to find the real war, not the war as it is filtered through political, social, and cultural narratives, but as told in an honest, forthright, nuanced, and sincere way, can turn to fiction for a larger unmediated variety of stories. Thanks to the fiction writers of the wars in Iraq and Afghanistan, the real war is finally in the books…. The way the wars were presented by the media, through some memoirs, and through other outlets was more sensational, it was more superficial, and it was more political, reflecting more of what the broader civilian public wanted to hear than the true and complex experiences of those who were deployed on their nation’s behalf.

Cage rightfully expands on the idea that “true and complex experiences” of war might best be written by veteran authors to include civilian authors as well. He proceeds by examining four literary fiction titles that he asserts offer the complex truth-telling richness he values: Lea Carpenter’s Eleven Days, Laura McBride’s We Are Called to Rise, Phil Klay’s Redeployment, and Matt Gallagher’s Youngblood. I’m down with that, but the chapter leaves me wanting a little more than Cage delivers. Rather than diving deep into the narratives the authors have created to demonstrate how fiction’s “true and complex” representations improve upon sanctified general understandings, the chapter concludes with summaries of interviews Cage conducted with the authors about why they wrote the stories they did. I’m not not interested in the authors’ ideas, but especially in a book about narrative strategies, the dictum “trust the tale, not the teller” has some purchase, so would liked to have seen more in-depth exploration of the authors’ actual stories.

Carpenter’s, McBride’s, Klay’s, and Gallagher’s fictions are indeed complex and contain truths, so getting specific about the narrative discourses in which they participate, we might say: Carpenter’s Eleven Days explores the mythology of Special Operations (particularly SEALs) (boy is that ever a narrative worth interrogating), McBride’s We Are Called to Rise asks us to think about traumatized veterans, Klay’s Redeployment stories ponder veteran complicity with evil, and Gallagher’s Youngblood might be read as a parable of the difficulty of knowing who one was fighting while in Iraq and the vexed nature of tale-telling after the war. Honestly, as much as I love those books, they seem (to varying degrees) to instantiate prevailing cultural beliefs about fighting men-and-women as much as critique them or offer compelling alternatives. Be that as it may, with just a little work, the fictional works Cage examines at the end of War Narratives might be linked back to the public sphere narratives he analyzes in Chapters One through Five to resolve, synthesize, or undermine them. The possibilities are there….

A great virtue of War Narratives is that it is short and apprehensible. It can be read over a weekend, the arguments absorbed and evidence digested easily, and the personal wrangle, as I have done here, commenced quickly. Also, War Narratives is a book-wonk’s dream, with Cage offering splendid capsule summaries and analyses of dozens of war-related biographies, memoirs, and journalistic and historical accounts. That Cage himself is a vet, a graduate of West Point, no less, and also the author of a very good short-story collection titled Desert Mementos, makes War Narratives’ arrival so much the sweeter. One only wishes it weren’t so alone in its orientation, and that it joined a robust collection of works exploring contemporary war and contemporary war-writing more holistically and conceptually than what we currently have.

The chapter “On Chickenshit” can be read here on the War, Literature, & the Arts journal website.