World War I movies such as They Shall Not Grow Old and 1917 are made by famous directors, feature big production and publicity budgets, and attract critical acclaim and popular audiences. Movies about contemporary war, on the other hand, occupy a smaller place in the Hollywood realm. Take, for examples, two 2017 releases, Mine, about a Marine sniper caught in a minefield, and Megan Leavey, about a female Marine dog-handler, both made by low-profile directors and exuding budget-rate production values. I missed both movies upon release, and never heard or read anything about them in the three years since their arrival until I discovered them last week while net-surfing. Though neither movie is perfect, I enjoyed both, and found in them much of interest. So, while others write mighty reviews of epic films about tremendous battles, I’ll sing the virtues of forgotten movies about America’s forever wars.

Mine was co-directed by two Italian first-time Hollywood directors, Fabio Guaglione and Fabio Resinaro. Set in an unspecified Global War on Terror desert location, Mine opens as does American Sniper and the Canadian sniper-flick Hyena Road: an elite-force sniper and his spotter lie poised to take out Muslim bad-guys. In Mine, as in its predecessors, the mission goes awry, and the sniper team must walk across six miles of mine-filled desert to their extraction site. Predictably, first the spotter steps on a mine, suffers a double-amputation of his legs at the knee, and subsequently succumbs to his wounds. Next, the sniper, as he steps toward his dying buddy, detects the tell-tale click of an anti-personnel mine set to detonate beneath his foot. If he lifts his boot, the mine explodes, and he dies along with his buddy. Frozen in place, he contacts his higher headquarters by radio and is told it will be 52 hours until help arrives. Can he hold on? What will happen to him as he waits? How will he be rescued?  These questions drive the remainder of the film.

The set-up is contrived, but intriguing as it plays out. Fair warning, though–many critics have called Mine pure hokum—its 17% positive critics rating on Rotten Tomatoes is the lowest I’ve ever seen. Whatever, I liked Armie Hammer as the sniper, Sergeant Mike Stevens. The lunky-and-hunky Hammer certainly looks the part, and he works hard to keep not just his character but the film alive. Caught in a nightmare scenario that tests both his wits and his stamina, Sergeant Stevens must summon more physical resources than even the toughest Marine might be expected to possess, and confront psychological terrors brought on by stress and fatigue he’d rather suppress. For directors Guaglione and Resinaro, the challenge is developing plausible and exciting events and plot turns to fill ninety minutes of screen time. They’re not entirely up to the task, but they have a nice visual style. As one review puts it, “The Fabios appear to have some talent, but not a lot of common sense” (watch the movie, you’ll see). For my money, though, their work honors Italian filmmaker legend Sergio Leone’s films The Good, the Bad, and the Ugly and A Fistful of Dollars, which star Clint Eastwood. A celebration of masculine hardiness, perseverance, and ingenuity, Mine is a spaghetti Western for our times.

After a taut first twenty minutes, Mine’s pace become languid and somewhat repetitive. In contrast, Megan Leavey, directed by Gabriela Cowperthwaite, trips along nicely, with each scene crisply and economically contributing to a satisfactory whole. Starring Kata Mara in the title role, Megan Leavey is based on a true story about the actual Megan Leavey’s battle to reunite with the bomb-sniffing dog with whom she worked in Iraq as a Marine. Meagan Leavey, then, is not just a biopic of Leavey, but also the story of her canine partner, a magnificently ferocious German Shepherd named Rex. Mara is excellent as Leavey and more than up to the task of sharing the screen with the charismatic Rex. Pint-sized and narrow-shouldered, Leavey is swallowed up by the baggy uniforms and cumbersome combat gear she wears. On appearance not promising, underestimate Leavey at your peril, for beneath the unimpressive exterior lies a basic competence and formidable desire to succeed.

Not to say she is perfect; part of the movie’s charm lies in showing how Leavey, as a young woman, is often confused and mistake-prone. But the potential is there and is recognized by her chain-of-command, who suss out that Leavey contains the requisite blend of toughness and tenderness to bond with Rex, who heretofore has resisted training by male dog-handlers. In all this Mara resembles a younger version of the Jessica Chastain character in Zero Dark Thirty. Leavey is not yet that film’s Maya–a bad-ass capable of vanquishing professional rivals and torturing and killing enemies without flinching—but she is on the way to becoming a smart, strong-minded woman easily able to hold her own in a man’s world. First though, she must confront a series of hurdles as terrifying in their way as the landmines faced by Sergeant Stevens in Mine: rage-prone Marine sergeants, stiff qualification tests for dog-handler school, intimidating initial encounters with Rex, and finally the horror of combat, where she is wounded and evacuated from the battlefield. Those obstacles surmounted, fighting the military bureaucracy post-deployment for permission to adopt Rex doesn’t seem much of a challenge at all.

So, two movies about heroic triumph over adversity leading to personal achievement and transformation. An interesting point of comparison is how the two films portray their protagonists’ relationship to their chains-of-command and the larger military culture they have joined. In Mine, Sergeant Stevens is virtually abandoned by his higher headquarters, whose radio communiques to him have an oddly sterile remoteness that make them sound like they are being transmitted by aliens from outer-space. The other-worldly effect suggests that individual Marines such as Sergeant Stevens are disposable factotums in the eyes of the higher-up machinery. In Megan Leavey, the chain-of-command is all too present and emotionally engaged with Leavey, as they tell her in loud voices and no uncertain terms that she must get her act together to achieve the things she really wants (in graphic military slang not used in this family-friendly film, she must “un-fuck” herself). Cowperthwaite might have made Leavey’s story one of victory over a misogynist patriarchy (as does Zero Dark Thirty), but Leavey doesn’t seem to understand her lot that way. Instead, the suggestion is that she knows she’s a participant in an older, sweeter, and sometimes truer tale: how the military, in its “tough love” way, serves as the means by which young men and women maximize their potential. Which is kind of the point of Mine, too, though no thanks to the chain-of-command there.

Not to hate on World War I films, RIP Kirk Douglas, star of what might be the greatest WWI film of them all, Paths of Glory. A couple of years ago I was asked to participate in a panel discussion of Paths of Glory at Yale by vet-author Adrian Bonenberger, along with Benjamin Busch, Jennifer Orth-Veillon, and Brianne Bilsky. It was a wonderful opportunity, a great time, and a fond memory. 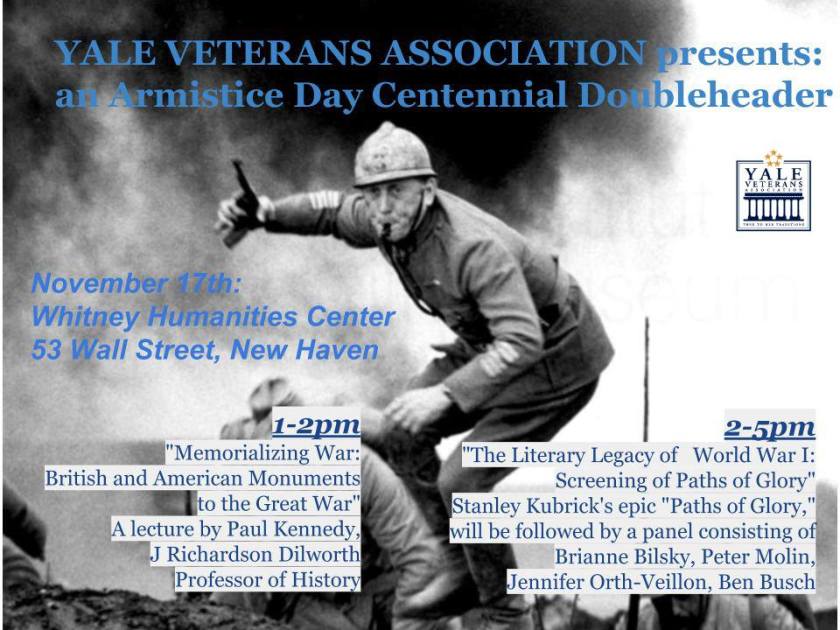