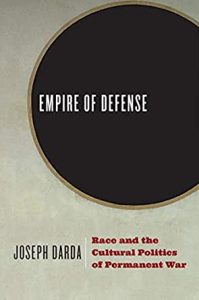 In “Chapter Five: The Craft of Counterinsurgent Whiteness” of Empire of Defense: Race and the Cultural Politics of Permanent War Joseph Darda places the literary-fiction titans of contemporary veterans-writing—Matt Gallagher, Phil Klay, Kevin Powers—under the microscope of scholarly analysis.

In the larger argument of Empire of Defense, Darda offers a theory for how race and racism factor in the endless warfaring and escalating militarism of everyday life in America. He pinpoints the National Security Act of 1947 and the creation of the Secretary of Defense in 1949 as pivotal historical moments, arguing that the renaming and reorganization of our national security apparatus were attempts to mitigate the excesses of old-style colonialism and racism while allowing the prerogatives of national authority to remain in the hands of the powers-that-be, who, it goes almost without saying, were white males. Post WWII, legal racial oppression and global empire building were no longer tenable, but a new liberal humanism organized around “defense” allowed for a modicum of progressive social change, while insidiously normalizing a new regime of white values and outlooks, both at home and abroad. The name-change from “Secretary of War” to “Secretary of Defense,” for example, diminished awareness of  imperialistic projections of power and uses of violence that usually involved killing or subordinating people-of-color. Instead, in a semantic sleight-of-hand, our military would now “defend” America against various “isms” and causes that obscure racialized motives. So, instead of fighting yellow-skinned people in Korea and Vietnam, we fight “communism.” Instead of fighting Mexicans, we fight a “war on drugs.” And instead of fighting Arabs and Muslims, we fight “terrorism.” The linguistic trickery pays lip service to notions of respect, diversity, equity, inclusion, and equality when convenient, and it has been very convenient to do so in order to recruit African-Americans into the military. It has also been convenient to preserve reputation in the eyes of liberal voters, intellectuals, and journalists—at least those who were not, per Darda, in on the treachery.

In Darda’s account, war fiction participates in anti-racist/racist duplicity by consistently creating heroes out of a few “good white men” who embody liberal values without giving up the actual perks of whiteness, and in fact instantiate the notion that ideas held by white men constitute foundational moral values. He writes, “The sensitive white soldier, from Hemingway’s Frederic Henry to Joseph Heller’s John Yossarian and O’Brien’s Paul Berlin, though celebrated for shaking off ideological constraints, defends, above all else, himself and his own liberal consciousness.” So, too, per Darda, for the white heroes of post-9/11 war fiction, and so too for their authors:

Although veteran-writers [Matt] Gallagher, Kevin Powers, and Phil Klay have been critical of the wars in which they fought, their fiction aligns with the state’s militarization of cultural knowledge.

“Chapter Five: The Craft of Counterinsurgent Whiteness” begins with two passages that set-up analysis of Powers’ novel The Yellow Birds, Klay’s story “Psychological Operations,” and Gallagher’s novel Youngblood. The first passage, unfortunately for fans of contemporary war-fiction, excoriates Gallagher’s 2011 Atlantic magazine article “Where’s the Great Novel About the War on Terror?”, Gallagher himself, and the contemporary veteran fiction-writing scene. We’ll hurry past that section to summarize more fully the chapter’s second preamble, which explores the writing and rhetoric of US Army Field Manual 3-24 Counterinsurgency, published in 2006 at the behest of General David Petraeus. Darda focuses his attention on the third chapter, “Intelligence in Counterinsurgency,” which (the FM 3-24 chapter) was mostly authored by “Yale University-trained cultural anthropologist” Montgomery McFate. Darda explains how in the chapter McFate promulgates the idea that modern war requires “cultural awareness” to craft compelling “narratives” to shape understanding and achieve objectives. Darda offers a good line re McFate: “Her chapter reads like critical theory that has been reverse engineered to reinforce rather than challenge hegemony.”

The FM 3-24 discussion leads to a damning argument about contemporary war fiction: “The thesis of the McFate-authored chapter of Field Manual 3-24—a thesis that resurfaces in American veteran fiction—is that successful counterinsurgency necessitates the militarization of cultural narrative.” A little later: “Some of the most acclaimed new veteran-writers—Gallagher, Klay, Powers—served in counterinsurgent forces, and their writing reflects the doctrine’s utilitarian understanding of cultural narrative.” This seems on-to-something, as The Yellow Birds, “Psychological Operations,” and Youngblood are indeed written by soldiers who fought in Iraq according to counterinsurgency principles while more-or-less believing that they were trying to fight more humanely and also more smartly. They dramatize that struggle in their works, and their first-person narrators speak directly about the difficulty of constructing coherent narratives of their deployments.

Darda could have done even more with this line-of-analysis, but he’s after bigger fish than narrative meta-anxiety. About the authors’ investments in whiteness and the cultural work done by their stories, he writes:

…and the first, foremost, and only thing that happens when a white male author picks up a pen to write a story is validation of himself and his white characters.

That these writers are all white men is not a coincidence, because whiteness has continued to be a condition for conducting defense (counterinsurgency), as a means of dictating the uneven distribution of life chances (racialization) in the counterterror era.

Those are serious charges about the authors’ thoughts, motives, and actions, and unfortunately for Darda the analysis of the aspects of The Yellow Birds, “Psychological Operations,” and Youngblood that he argues perpetuate racist ideology and practice aren’t as persuasive as the passages that explore narrative angst and instability. I won’t say much here except that he doesn’t make much allowance for the idea that art and writing can critique politics, ideology, official discourse, and popular opinion rather than reflect and instantiate them. I also note two factual errors in Darda’s recounting of character-and-plot details of Youngblood–not confidence-inspiring given how the novel and its author figure so prominently in Darda’s argument. Fans of contemporary war-writing probably won’t like or agree with what Darda has to say, but students of the intersection of 20th and 21st-century race, culture, politics, war, and war-literature might consider checking out Empire of Defense for themselves.