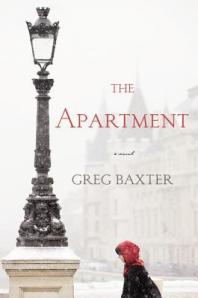 The press blurbs on my copy of Greg Baxter’s novel The Apartment describe it as “unshowy” and “understated,” and compared to the stylistic and thematic pyrotechnics of war novels by authors such as Ben Fountain and Hilary Plum, the descriptions fit. The story of a day-in-the-life of a Navy veteran of tours in Iraq both in uniform and as a contractor as he searches for an apartment in an unnamed European city, The Apartment’s prose surface rarely calls attention to itself. Nor does much dramatic happen in the course of the day, although the first-person narrator eventually does find a place to live. Nothing seems to have much consequence, which is definitely the way the narrator wants it, but Baxter’s own thoughts about the matter are more inscrutable. As we contemplate the narrator’s effort to lose himself in his new identity as an unremarkable expatriate in a bland, far-off land, a new take on the subject of life after war seems to emerge. While service has not made the narrator dysfunctional, he is deeply disenfranchised. Twenty years in the Navy and after have left him nothing to be proud of, while filling him with contempt for the nation he served. But not inclined to make a fuss of anything, he seeks only to be left alone while he disappears from view.

The narrator is said to have been a submariner, a detail that resonates personally with me. On my tiny landlocked FOB in Afghanistan were several Navy submariners, plopped among us by the idiosyncrasy of the military manning system, and they impressed me as quiet, regimented, and very precise individuals. Frankly, I think they looked at us Army types as dangerous cowboys who were making everything up as we went along, which wasn’t exactly wrong, and I’m sure the qualities they possessed, as does The Apartment narrator, served them very well on long tours in tight quarters under the ocean. The narrator’s job in Iraq was as a staff intelligence analyst, with, on the first tour at least, some duty as an intel liaison to ground troops. Missions outside the wire showed him the face of combat, while duty inside the wire taught him that he might turn military service into big bucks as a contractor back in the warzone following retirement. His thoughts about the filthy crosshatching of lucre and patriotism offer some clues to his disillusionment. A fellow contractor tells him, “I mark my prices up one thousand per cent.” The narrator himself says, “The way I estimated my fees for the Army—I worked for the Army more than anybody else—was to dream up a figure that seemed unreal and add a zero.” The remark is just one of several scathing indictments of the military:

“From the bottom to the very top, the one thing all American leaders had in common was an unpreparedness for the very thing they’d wake up to face the next day.”

“A lot of the guys I met in Iraq were insufferable nerds, idiots, bullies, or bureaucrats who could not function in the civilian world, where some degree of creativity is required. But I also encountered the calm, stoic intelligence of the men who seemed less like human beings and more like discrete manifestations of the immortality of violence.”

Well, ouch, but poking holes in the structural lash-up of the American war effort is as easy as shooting fish in a barrel, and not even the narrator’s main concern. Whatever his thoughts about contractor perfidy and military pathology, the narrator takes the money he earns in Iraq and runs away, as far away as he can get. More pressing than political critique is a disgust with himself that borders on self-hatred, and the remedy is oblivion: “In a year I’d like to be invisible,” he states, “I’d like to have a life where people don’t monitor my movements, even accidentally.” Friends, family, and somebody to talk to mean little to him, and the business of finding somewhere to live is more of an annoyance than a means to solidify his place in the world. As it happens, he is accompanied on his search for an apartment by two cool and pretty younger women, but for the narrator even the desire for a relationship and the flames of lust burn dimly. Two scenes in which he and one of the women change clothes in front of each other, for example, come and go with nary a flicker of erotic heat.

The upshot of the narrator’s strange dream of a life and Baxter’s strange dream of a novel is as hard to fathom as the course of the submarines on which the narrator served. Baxter has imagined into existence an Iraq veteran of a different breed, and given us few hints whether he thinks his vet narrator’s plight is exemplary or representative, or whether things will end well or not for him. The Apartment exerts an alluring pull, but like the deep vasty ocean it doesn’t give up easily the mysteries that may lie beneath its enigmatically flat surface.