At AWP14, I had lunch with a hail-fellow-well-met merry band of war writers.  At the far end of the table were Roy Scranton, Benjamin Busch, Phil Klay, and Christine Leche.  At our end were Brian Castner, Mariette Kalinowski, Colin Halloran, and Lauren Kay Johnson.  Katey Schultz was supposed to be with us, but peeled off enroute to our Seattle waterfront restaurant destination.  About two beers in, I announced that I was reading James Joyce’s Ulysses as part of a nationally-dispersed, Internet-connected reading group.  I was about 99% prepared for that conversational gambit to fall flat.

Boy was I wrong.

Our end of the table erupted in an explosion of comments, questions, and exclamations.  Mariette Kalinowski had read Joyce’s modernist masterpiece in the not so distant past.  So had Colin Halloran.  Not sure about Lauren Johnson, but because we were happy she let us rave on.  Brian Castner, it turned out, was auditing a class on Joyce at Niagara University in Buffalo.  He didn’t like Ulysses as much as the rest of us, but that made for good conversation.  He told us that his prof at Niagara had studied under an Irishman named Declan Kiberd. I liked that, because I think the world of Kiberd’s Ulysses and Us: The Art of Everyday Life in Joyce’s Masterpiece.  Here’s what Kiberd writes about Ulysses as a World War I novel:

“The world war raging as Joyce wrote had been made possible by a narrow-mindedness among nations, whose leaders often failed to see the larger context of their actions.  The openness of form and the multiplicity of viewpoints in a book like Ulysses implicitly challenges the sort of zealotry which led to the carnage.

“After the war, many soldiers were so traumatized by their suffering in the trenches they could no longer tell stories which carried the pressure of felt experiences.  Many also simply fell silent, lapsing into neurasthenia.  Even among those who remained eloquent on the topic, there was a sense of the ‘unreality’ of civilian life, of everyday living.  Ulysses, though begun around the same time as war itself, tried to restore the possibility that ‘good counsel’ might come from a story.  Young men who had gone to war in search of stimuli were now in search of a consciousness which would teach them how to protect themselves from over-stimulation….

“…..While Joyce wrote Ulysses, sovereigns fell, empires toppled, a world system collapsed:  but he knew he was writing a book for the future community which might take their place.  In that book he would explore modes of teaching and learning which answer the emotional and intellectual needs of ordinary people in search of a wiser way of life.”

Kiberd thinks Ulysses protagonist Leopold Bloom is a calm, wise, curious, warm soul who should be admired for his lack of militarism and nationalism.  The point is well-taken by my late-middle-age sensibility, though maybe not so accessible to those whose spirit burns younger and hotter.  Still, here’s to Joyce, to Ireland and the Irish, and to the “future community” of which Kiberd writes.  Tomorrow I’m entered for better or worse in a local St. Patrick’s Day 5K, so let’s see how that goes.  Below is a picture of the St. Patrick’s Day race we ran at Camp Clark, Khowst Province, Afghanistan, in 2009: 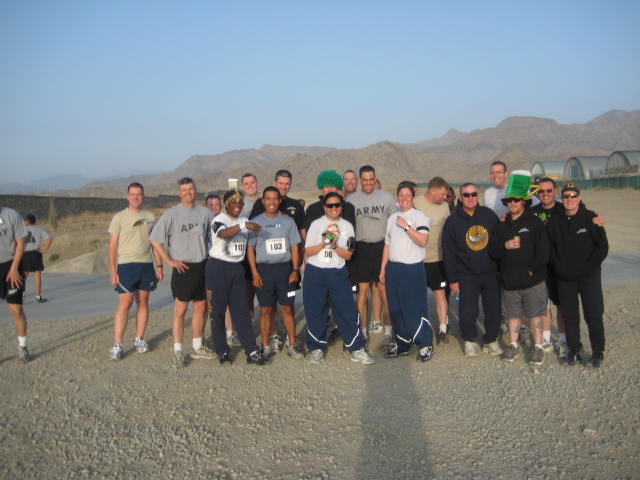 Roy Scranton is the editor of Fire and Forget, an anthology of war fiction. Benjamin Busch’s memoir of USMC service in Iraq is titled Dust to Dust. Phil Klay’s collection of Iraq stories Redeployment is just out.  Christine Leche edited Outside the Wire, a collection of stories written by soldiers in classes she taught on bases in Afghanistan.  Katey Schultz’s short story collection Flashes of War appeared in 2013.  Brian Castner is the author of The Long Walk, a memoir of service as an Explosive Ordnance Disposal officer in Iraq.  Mariette Kalinowski, a USMC Iraq veteran, contributed to Fire and Forget.  Colin Halloran served in the Army in Afghanistan and has written a book of poetry titled Shortly Thereafter. Lauren Kay Johnson also served in Afghanistan as member of the Air Force. An essay by her titled “Home from War, But Not at Peace” can be found here.