This picture by Bill Putnam shows a US Army patrol taking a brief halt on top of an Afghanistan hill. 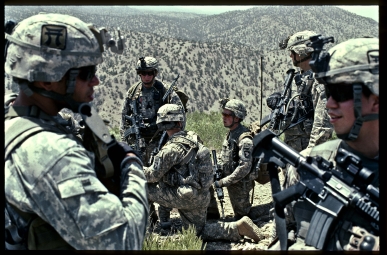 I like it for its muted color palette–grey, green, brown, some black–and the array of emotions reflected in the faces and bodies of the soldiers.  Some are relaxed, others display tension.  Their equipment hangs upon them not obtrusively, but organically, even the weird mounts for night vision goggles that protrude from their helmets like antennas and the M4 in the foreground that seemingly sits far too high on its bearer’s torso.  The way their gazes go off in different directions and the bulb like prominence of the helmets reminds me of Larry Burrows’ great picture of a hilltop scene taken during the Vietnam War: 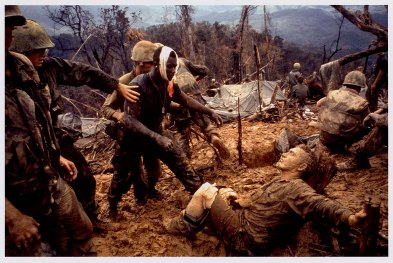 Burrows’ picture is far more dramatic, of course, and rightfully famous.  But who’s to say the soldiers in Bill Putnam’s picture aren’t themselves minutes away from a similar scene of devastation and carnage?