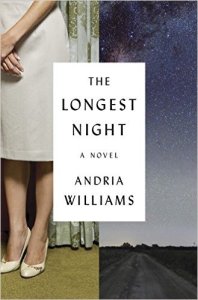 Congratulations to Andria Williams on the release of her novel The Longest Night this week. A domestic drama cum technological thriller about a military family during the Cold War, The Longest Night displays the same lively, curious, and generous spirit of Williams’ The Military Spouse Book Review, Time Now’s compadre in martial-themed literary blogging. Williams is an alert and appreciative reader of Time Now, thankfully, so my fear upon reading The Longest Night was not that I would dislike it, but that I wouldn’t be able to find ways to write about it in the context of my interest in Iraq and Afghanistan. Broadly considered, however, every novel published after 9/11 reflects and refracts the tension of contemporary war. Those recent novels that make their subjects past conflicts—Toni Morrison’s Home, Karl Marlantes’ Matterhorn, Denis Johnson’s Tree of Smoke, Sara Novic’s Girl at War, for examples—even more directly proffer ways to better understand what it means to be at war now by reminding us of antecedents. Without pushing the point too far or too hard, in The Longest Night, historical displacement—Idaho, 1961—might be said to allow Williams to obliquely address aspects of 21st-century military service, deployment, and war she has observed as a close reader of contemporary war literature and the wife of a several times deployed Navy officer.

The protagonists of The Longest Night are Paul and Natalie Collier, an Army couple with kids who are assigned to an Idaho Falls, Idaho, base dedicated to testing portable military nuclear reactors. Paul is part of a small team of enlisted soldiers responsible for the military’s smallest reactor, a temperamental prototype known as the CR-1. Paul is by-the-book and devoted to duty, which causes him to quickly run afoul of his boss, Master Sergeant Richards, a bitter, semi-functional alcoholic who resents Paul because he is young, hopeful, and dedicated. Paul is all that, but unfortunately, he’s also a bit rigid and unimaginative, which makes things hard for his wife Natalie, a freer-spirit who can accept the strictures of military life and marriage to Paul as long as she’s not reminded, that is to say tempted, by more exciting possibilities. But just as Paul fails to get along with his boss, Natalie’s relationship with Master Sergeant Richards’ wife Jeannie flounders. The social strain grows even more complicated when Master Sergeant Richards connives to have Paul re-assigned temporarily to another nuke site in far-away Greenland; in his absence, Natalie befriends and then loses her heart to Esrom, a dreamy Idaho cowboy-mechanic much more her type in spirit and outlook. To this saga of marital drama, Williams adds the danger of techno-catastrophe: upon Paul’s return to Idaho, the CR-1 undergoes a meltdown, which may or may not be a result of human error. Based on a true event in 1961 in which three men died, Williams’ dramatized version of the incident forces Paul and Master Sergeant Richards, as well as Natalie and Jeanne, to confront their animosity, and Natalie to come to terms with her feelings for Esrom, in the midst of calamity.

The Longest Night reminds us that at the tail-end of the Eisenhower era and the dawn of Kennedy’s New Frontier a small sliver of the populace actively faced the international threat-of-the-day while the vast majority of Americans got on with their lives as obliviously as possible. Even in a nation far more militarized than it is now, Paul and Natalie’s status as an Army family isolates them from native small-town Idaho residents resistant to outsiders and change. Paul’s nuclear silo, located 50 miles from town, resembles the combat outposts oft-portrayed in contemporary war-writing, and Williams better-than-most describes fraught soldierly human interaction in dangerous, isolated conditions. Startling descriptions of enlisted soldiers left responsible for highly-complex nuclear reactors—true historically—reminded me of contemporary military scenarios that have the officer corps preoccupied with strategy and careers while neglecting the worker-bees—to include the Chelsea Mannings, Edward Snowdens, and drone-operators—who actually have their hands on the cyber weaponry and killing machines of our day (though neither treason nor combat are issues in The Longest Night, I should say). Paul’s return home from work every day is certainly not reflective of Iraq and Afghanistan, though the close intertwining of warzone and homefront experiences made possible by today’s modern media makes an analogy conceivable. More saliently, Paul’s short-term deployment to Greenland allows The Longest Night to portray the experience of family separation entirely characteristic of contemporary war. Williams is everywhere all-the-time alert to the difficulty military service places on marriage: Paul does not plan to be a distant, neglectful husband and Natalie has no intention of being tempted by another man, but so it happens in the novel and so it still happens to military couples.

1961 was a time of social conformity, while 2016 prizes individuality, so it’s tricky business retroactively creating characters who inhabit that distant age without being either stereotypes or looking like aliens imported from the future. For me, Paul and Natalie are true to their period: intelligent processors of their perceptions and experiences, but still beholden to the cultural possibilities available to them. They are far more conventional and purposeful than the often reckless and hedonistic enlisted couples I knew while in, but I’ll buy that their propriety–as well as their own form of recklessness–was characteristic of the era. Williams notices what her characters notice, but also much that they don’t understand or only half-intuit; this close attention to their interiority as much as the period detail makes The Longest Night come alive. In many ways, though, the strictures of military service and culture portrayed in The Longest Night might be said to be timeless, for Williams casts a net around military families and military duty and pulls in many fine fish in the way of still relevant insights about life in uniform. Readers who never served or veterans who served only a tour or two can make of Williams’ portrait of military domesticity what they will, but readers who have tried to keep a marriage together over the long haul of a military career will marvel at her acuity at describing the rewards and pleasures, such as they are, while also conveying a more pervasive feeling of disappointment and perhaps even of life wasted. That’s almost too tough a sentiment to contemplate in the present, frankly, so it helps that Williams has framed the possibility in a long ago, far-away place.

Some readers, I suppose, will have trouble with Williams’ kluging of domestic drama and techno-action storylines, but The Longest Night’s suspense-and-surprise-laden plot elevates it above the faux-biography and mundane reportage of much war fiction. Keeping together the complicated mix of ingredients—family drama, military dysfunction, nuclear meltdown, Cold War America, the civil-military divide—is Williams’ power of language. The Longest Night sentences bounce with unexpected word choices, turns-of-phrase, figures-of-speech, and images. Exciting use of free indirect discourse generates finely-shaded judgments in those novelistic spaces between the characters’ thoughts and Williams’ own. Descriptions of nuclear reactor technology never bog down the narrative, and dialogue meant to be charming or funny actually is—tonally, The Longest Night is winsome, but it’s easy to imagine Williams writing comedy. Imagination, insight, and craft are all in fine order, so the saddest thing to report here is that we won’t have the pleasure of reading a review of The Longest Night on The Military Spouse Book Review.