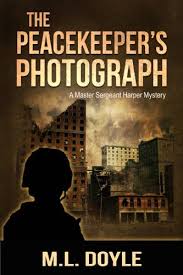 I’m very happy to have my interview with veteran-author Mary “M.L.” Doyle appear in the latest issue of 0-Dark-Thirty, the literary journal published by the Veterans Writing Project. Getting to know Doyle and her work has been both enjoyable and illuminating. As the headnote to the interview explains, the uniqueness of Doyle’s perspectives and the variety of her titles are impressive. Both her personal background and her writing ventures—an African-American former Army sergeant first class who writes military crime fiction and military-themed urban romance/fantasy while co-authoring memoirs of prominent minority women-in-uniform—intrigued me greatly upon learning about them. Our interview fulfilled expectations that her thoughts about it all would be as interesting as the works themselves.

For readers interested in exploring Doyle’s books, I suggest starting with her military crime novel debut The Peacekeeper’s Photograph (2013). Set in Bosnia on an Army FOB in the 1990s, The Peacekeeper’s Photograph is the first of three “Master Sergeant Harper” mysteries Doyle has now authored. It features many elements relatively untouched by most contemporary war lit: not just Bosnia, but a female senior NCO’s perspective, command group treachery, soldier romance, Army racial dynamics, and the threat of rape faced by military women if captured. Readers might also try The Bonding Spell (2015), about a female Iraq War veteran who channels the spirit of an ancient Sumerian goddess after picking up a magical relic while deployed. I also recommend I’m Still Standing: From Captive US Soldier to Free Citizen (2011), Specialist Shoshana Johnson’s memoir that Doyle co-wrote. Johnson, if you will remember, was the African-American junior enlisted cook who was captured by Iraqi insurgents along with Jessica Lynch in the early days of Operation Iraqi Freedom. Considering Johnson’s view of war alongside that of not Lynch’s, but, say, ex-SEAL Matt Bissonnette’s, as expressed in his memoir No Easy Day, which I also read recently, juxtaposes the diverse experiences of Americans who serve the nation in uniform–and all the advantages and rectitude do not necessarily accrue to sagas of white male combat-arms super-warriors. To be clear, I thought No Easy Day was fascinating and salute Bissonnette’s combat prowess, but I’m Still Standing, as does everything Doyle writes, demonstrates how the military is many people and many things.

The interview offers Doyle’s insights about all I’ve mentioned above and much else, to include her views on the rewards of independent publishing. Please read it and then seek out Doyle’s own remarkable body of work—really, start anywhere and you won’t go wrong.

A final note: As the Mentor Program Coordinator for the Veterans Writing Project, I’ve matched up some 30 aspiring veteran-writers with experienced authors and teachers in online mentoring relationships. We now need more mentors, so if you have time, inclination, and ability, I’d love to hear from you.  The aspiring writers are wide-ranging in age and writing interests, but some basic splits are between male/female, Vietnam/Iraq-Afghanistan, and fiction/memoir/poetry/screenwriting, and I do my best to match veterans and mentors who will prove compatible. No military experience is required for mentors–just a capacity to teach and a desire to help. You can reach me at petermolin@msn.com.