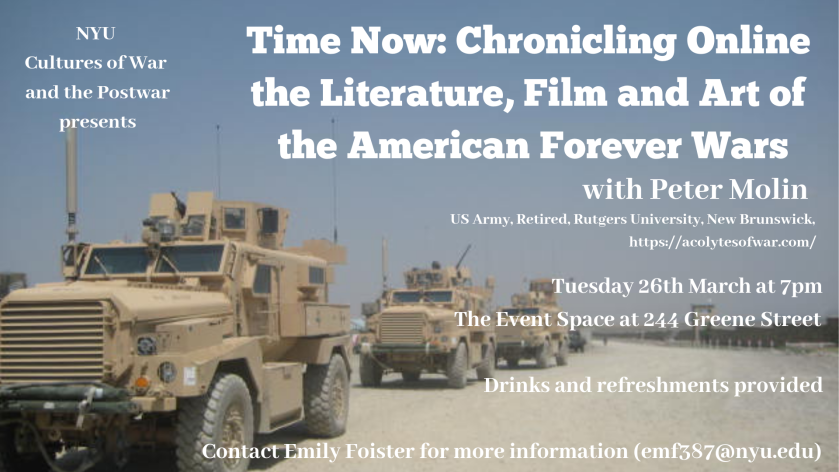 Back to School I:  Time Now at NYU

The invitation from New York University’s Patrick Deer to speak at his Cultures of War  interdisciplinary seminar was simple:  What is the story of Time Now? Deer asked.  Why did you begin it?  Where did you get ideas for what it could be?  What has the experience of “live-blogging” the contemporary war lit scene been like? I’m not especially given to writing about myself, but if you ask me I’ll be glad to talk about such things.  I was flattered by the invitation and welcomed the chance to think meta-reflectively about a project that’s been a big part of my life for the last six years.  Here’s a snippet from my notes for my opening remarks:

Why I started Time Now.  Because my old blog 15-Month Adventure about my deployment to Afghanistan had run its course.  Because I heard Matt Gallagher at a conference state that he couldn’t imagine being a contemporary vet-and-mil writer without having an online presence. Because I thought I had a unique personal angle:  a PhD in American Lit who served a pretty intense year’s deployment in Afghanistan. Because my boss in the Department of English and Philosophy at West Point, where I taught at the time, put me in charge of a program designed to bring veteran artists and writers to West Point and the blog seemed congruent with that. Mostly because I had a sense that something good was happening—Brian Turner, Benjamin Busch, Matt Gallagher, and Siobhan Fallon were writers already on my radar and I’d heard-tell that novels about Iraq and Afghanistan by David Abrams, Ben Fountain, Joydeep Roy-Bhattacharya, and Kevin Powers were enroute… and I wanted to be part of it all….

Once I stopped blabbing, the conversation and Q&A opened up in interesting, wide-ranging ways. I was honored to have in the audience Teresa Fazio, who held forth with more insight and credibility than I could ever muster about the status of women war-mil-vet authors in the publishing biz, and I was delighted when Matt Gallagher arrived to walk back a little his statement that an online presence was essential for an aspiring writer—his own very solid Twitter-game notwithstanding. Many thanks to Patrick Deer and all who attended, especially those who chimed in with questions and comments, all of which continue to bubble in my mind and will certainly find expression in Time Now posts to come.  Keep an eye out for Patrick Deer’s own books—Culture in Camouflage:  War, Empire, and Modern British Literature (2009) and the forthcoming Surge and Silence:  Understanding America’s Cultures of War, and if you’re ever so lucky to get an invitation to speak at or attend a Cultures of War event, grab it.

Back to School II: Time Now at Wesleyan 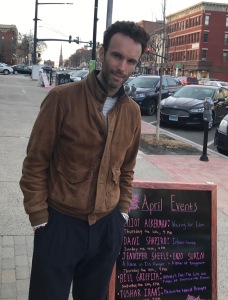 A week later I was the guest of college friend William “Vijay” Pinch on the campus of  Wesleyan University in Connecticut.  Pinch grew up in India and Pakistan and now is a professor of South Asian history at Wesleyan. This semester he is teaching a course on “The Great Game”:  the centuries-long battle by imperial powers (first England and Russia, now largely supplanted by the US and China) for control of Afghanistan.  Last fall, Pinch asked me for a recommendation for a novel about 21st-century war in Afghanistan that might appeal to his students, and I quickly nominated Elliot Ackerman’s Green on Blue, about a young Pashtun militia member’s toughening by endless war on the Afghanistan-Pakistan border. Pinch thought that was a great idea, and to further liven up things, he invited Ackerman to Wesleyan to meet his class and participate in a series of related events. Lucky me, Pinch was kind enough to ask his old college basketball-buddy to tag along.

The day was full of excellent things, with Ackerman in fine form at every event.  In Pinch’s class he proclaimed that his rationale for writing Green on Blue was to answer the question “What type of war was Afghanistan?”, with the answer being, “It was being fought for every reason except one… to win it.”  And THIS was Ackerman’s expression of the view of things held by the Afghans, who he explained are just as caught up in “forever war” cycles-of-violence as is America.  At a writing workshop, Ackerman had wise, funny advice for students (many of them vets) seeking careers in journalism, and at a reading that night he spoke of creating the characters who populate his latest novel Waiting for Eden and the implications of the John Milton quote—“War hath determined us”–on the dust-jacket of his forthcoming memoir Places and Names:  On War, Revolution, and Returning.  Ackerman apparently is incapable of saying dull things, and he has the added virtue of answering questions in individualized and personalized ways so that their askers feel the full force of his empathy and intellectual curiosity for why they might have posed the question they did.

I’ll close with an anecdote that occurred while we were walking about Wesleyan.  Inspired by his own return to a collegiate setting, Ackerman began riffing on scenes from the classic Rodney Dangerfield film comedy Back to School.  I don’t know if Pinch knows the movie, but I do, kind of.  Unfortunately, though I can remember every song I’ve heard since 1964, I have a horrible memory for remembering film dialogue, which puts me at odds with most military folks I’ve known, for whom reeling off lines from shared favorites serves as great fun and folk wisdom.  So, I wasn’t able to exchange funnies with Ackerman, but the mere mention of Back to School brought back memories of my first sergeant when I commanded a company in the 82ndAirborne Division and how much pleasure he got from reciting lines and recalling scenes from the film. Upon returning home, I spent an evening on YouTube chuckling over Back to School videos, including this great one featuring Sam Kinison that reminds us that Back to School was in fact a post-war film:

And so the work of defining the contours of vet-writing about Iraq and Afghanistan and what it means to live as a veteran afterwards proceeds on many levels and in many places, but with special trenchancy at places like NYU and Wesleyan.  If the link below works, it will take you to a slide show of pictures I took in Afghanistan that offer some sense of the world described by Ackerman in Green on Blue.

6 thoughts on “Back to School at NYU and Wesleyan”