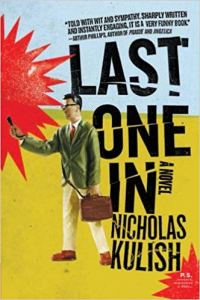 Nicholas Kulish’s 2007 novel Last One In, about an unlikely war correspondent embedded with US Marines during the 2003 invasion of Iraq, didn’t pass unnoticed upon release. A New York Times review, for example, called it “funny, harrowing, and sympathetic,” as well as a “worthy addition to the curious but indispensable shelf of war satires.” Last One In seems not to have made much of a lasting impact, however. The contemporary war-writing fiction scene didn’t get rolling for another few years, and when it did, “war satire” never established itself as a dominant mode for depicting war in Iraq and Afghanistan, David Abrams’ great Fobbit the exception that proves the rule. Instead, a downbeat dwelling on the traumatizing costs of war as experienced by the individual soldier prevailed as the dominant subject and tone, reflected starkly in works such as Kevin Powers’ The Yellow Birds, Phil Klay’s Redeployment, and the stories in the seminal anthology Fire and Forget. Last One In’s focus on Operation Iraqi Freedom’s opening act also seemed to have missed the mark of the nation’s interest, as an onslaught of later books—the ones I’ve mentioned above and many many more–about the difficulties veterans face after coming home came to define publishing and popular thinking about what it meant to write about war in Iraq and Afghanistan. Another factor that helped relegate Last One In to obscurity was a national literary sentiment that privileged narratives about contemporary war authored by soldier-veterans above those written by anyone else. The veteran’s voice, polished by tutelage in MFA programs and veterans’ writing workshops, exuded an authoritative credibility that has left civilian authors of war-and-mil novels, even superb ones such as Ben Fountain and Roxana Robinson, constantly having to explain themselves, perpetually fighting uphill for respect and readers. Journalists especially seem to have collectively decided not to even try to write novels about the modern wars; off the top of my head I can’t name another fictional work about war in Iraq or Afghanistan by an author who identified primarily as a reporter.

Reading Last One In recently (I had never of it before this year, and I make it my business to know about these things), Kulish’s novel struck me as of a piece with Evan Wright’s much more well-known Generation Kill (2004), and the 2008 HBO television series of the same name based on Wright’s book. Both Last One In and Generation Kill feature inside looks at Marine units as they alternatingly charge and creep from Kuwait to Baghdad in the opening days of Operation Iraqi Freedom. Both works are focalized through the eyes of embedded journalists stuffed into the back of Humvees manned by Marine enlisted soldiers. In each case, the Marines swap endless insults and complaints, both to entertain each other and burn off anxiety in-between occasional moments of action. Neither Wright nor Kulish have much to say about tactics, strategy, or actual fighting, but then neither do the Marines with whom they ride. For both authors, the really interesting subject is the very masculine Marine culture they’ve been given access to, as it is for the Marines themselves, whose chatter revolves endlessly around how it is to see the world through the eyes of a Marine. The peep into Marine culture both fascinates and repulses Wright and Kulish. In the television series version of Generation Kill, for example, close-ups of the Wright character predominate as he responds silently-but-bug-eyed to the foul-mouthed, insubordinate, and politically incorrect tirades of the driver of the vehicle in which he rides. In Last One In, one suspects Kulish relied on good notes to craft lines such as:

…they talked their way through the celebrity spectrum, about who was uglier in real life, who had gained weight recently, and who was gay. Speculating on male homosexuality was the most popular subject. The only actors they didn’t seem to consider closet cases were Mel Gibson, Bruce Willis and Harrison Ford. Han Solo could not be gay, the majority ruled. Brad Pitt and Ben Affleck, on the other hand, were two candelabra shy of Liberace.

Trying to determine the reporter-character/journalist-authors’ takes on the homophobia, misogyny, and racism they witness, as well as the Marines’ blatant lack of respect for many members of their chains-of-command and general disdain for Iraqis, is one of the more interesting deliberations that come with watching Generation Kill and reading Last One In. Is the casual crudeness part of the Marines’ charm, an integral verbal and mental aspect of hardened fighting men? Or is it a cringe-worthy social corollary to the surprisingly inept military proficiency and general thoughtlessness the reporter-observers often note? The decade-plus since Generation Kill and Last One In have intensified the questions, not answered them. The dominant sentiment, which I hold, is that such “toxic military masculinity” is neither charming nor necessary, and should be censored and policed by official chains-of-command and stigmatized by the media and the populace. To a certain extent, the needle has shifted within the military itself and such attitudes no longer are tolerated or even hold sway. But they are not gone, by any means, nor is there consensus that they should be. For some, the censoring and policing and stigmatizing are worse than the problem itself, if they even see it as a problem.

Last One In’s many scenes set among Marines in the close confines of their vehicles and squad bays reflect Kulish’s journalistic eye for detail. They also give me a chance to expound briefly on sociologist Pierre Bourdieu’s concept of habitus. It’s a concept that especially interests me as I read and watch stories about contemporary war and how they depict the microcosmic world of soldiers living among other soldiers. To quote from a reputable website, habitus “refers to the physical embodiment … of deeply ingrained habits, skills, and dispositions that we possess due to our life experiences.” To quote from Bourdieu himself, habitus is “a subjective but not individual system of internalised structures, schemes of perception, conception, and action common to all members of the same group or class.” (The Wikipedia entry on habitus is not bad in translating those ideas into plainer English).

Habitus is related to the concept of mise-en-scène, a film and stage term, but has a more literary and critical bent. Besides, one French aesthetic idea is enough to deal with in a single blog post. For me, an author’s or artist’s representation of military habitus is always the most interesting thing. I especially like thinking about habitus in relation to scenes set inside vehicles, where soldiers act and interact in ways that are learned, stylized, and performative, but also highly naturalized (or, “internalized”). When such scenes are done well, they not only make me nostalgic for my own time spent cooped up in military vehicles on long movements, but render the impression that the author or artist is highly alert to the essence of what it is like psychologically and sociologically to be a soldier. Bourdieu was a sociologist, and so for him an accurate account of a particular habitus depended on “objective,” nominally value-neutral “thick description” (another lit-crit term) depiction of observed habits and speech patterns, which are then ascribed to the holding of specific worldviews and attitudes. That’s also close to the credo of journalists and anthropologists as they observe cultures and sub-cultures and try to describe them as fairly and accurately as possible. Novelists and artists, for their part, value thick description, too, but also everywhere they constantly inflect their depictions with irony, ambiguity, and shades of perspective. They’re also aware that the very act of observation induces an “observer effect,” whereby the actions of the observed change under the act of observation. That is certainly a factor afoot in Generation Kill and Last One In, where the embedded journalist protagonists surveil with pen-and-pad in-hand the Marines with whom they pass hours, days, and weeks.

To put a point on this esoteric discussion, here’s a long passage from Last One In set in a Humvee during the slow grind to Baghdad. The embedded journalist is Jimmy, the Marines are Privates Ramos (also known as “little Macho”) and Martinez, and their squad leader Sergeant Harper.

The gaps in conversation were torture, since there was no dearth of terrible scenarios the imagination could conjure. After several minutes of miserable silence, Jimmy announced, “You know, I’ve been here for a week, and I haven’t seen one camel.”

[Jimmy exploded:] “Every minute since you’ve met me, I’ve had one thing on my mind. Thinking, ‘I’m going to fucking die. I’m going to fucking die.’ But do I whine about it? No. Because—because it’d get pretty boring to have me screaming about dying in the backseat all the way to Baghdad. Don’t you think?” Harper didn’t answer. “Don’t you think? So maybe I fucking want to talk about camels instead.”

“No, man,” Jimmy said with a laugh for the preposterously camel-free desert. “Not a goddamned one.”

“Me too,” Martinez said. They were using the indulgent tones of orderlies in an asylum.

“One hump or two?” Jimmy asked.

“One, I think,” Martinez said.

“Yeah, I think they were one,” Harper said.

“How come I’m the only Marine who hasn’t seen a camel?”

“Everybody shut the fuck up,” Harper said. “That’s an order.” The talking ban was surprisingly effective, lasting a full hour, probably because each was a little pissed off at the others. Harper kept leaning back like he was trying to sleep, but Jimmy found it impossible to get any rest with the fear, the bouncing of the jeep, and the sand caked against teeth, tongue, and nostrils. He took notes instead. When no one spoke, all they could hear was the groaning of the vehicle on its shocks and the static of tiny grains of sand pelting the canvas top. The sandstorm lasted longer than they could stand to listen to those sounds. It was Ramos who cracked.

“What you writing?” he asked Jimmy. “Saying we’re lost? Don’t write that shit.”

“Not saying anything. And you can’t tell me what to write anyway.”

“You saying we fucked up?” Ramos asked.

“I’m writing a letter to my mom,” Jimmy said.

“What’s it say?” the private continued to pry.

“You know what?” Jimmy told him. “It says we’re lost. Says you fucked up. What do you think now?”

“You…” Ramos began. “You tell her a real Marine says hello.”

“Yea. And tell her little Macho said hi, too,” Martinez added. Jimmy looked down at his paper and finished writing, blessedly undisturbed.

Nicholas Kulish, Last One In. Harper-Perennial, 2007.

5 thoughts on “War Fiction: Nicholas Kulish’s Last One In”