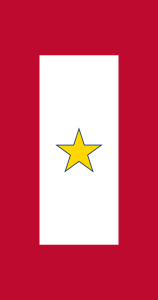 There are many ways to remember those who have died at war and honor their sacrifice. A Gold Star, affixed to the exterior of a house to signify the death in combat of a member of the family residing there, brings to the fore a particularly salient way, especially where I live.

My state is one of the long-settled, densely-populated ones on the East Coast, and it’s hard not to see houses adorned with Gold Stars as one drives about the neighborhoods, small towns, and countryside. By now, I know where I’ll see Gold Star homes on the routes I routinely drive, but when I’m off the beaten path I’m sure it’s only a matter of time before one appears. Still, I’m never not slightly taken aback when they do, familiar or unfamiliar, a feeling something akin to what Emily Dickinson writes of (in a different context) as a “tighter Breathing / and Zero at the Bone.” Inwardly I pay respect.

How many Gold Star residences there are in my home-state is something to contemplate. Some 80 state residents have died in either Iraq or Afghanistan, so most Gold Stars must reflect the 1000+ state residents who died in Vietnam, the several hundred in Korea, or the 10,000 who died in World War II. I assume the Gold Stars I see adorn houses in which the dead service members lived before joining the military and going to war, and in which family members who knew them, or heard much about them, continue to reside. Maybe I’m wrong to assume such, but the residences featuring Gold Stars usually are older ones that might easily date back to the 60s, 50s, 40s, or earlier, never one of the new townhomes or McMansions. It seems unlikely that a family would place a Gold Star on the exterior of a house that had never been lived in by a service member killed-in-action, but perhaps that happens sometimes. The point is, I’m curious that so many families live in the same homes from which previous family members went off to war and never returned. In modern transitory America, I wouldn’t think that would be the case.

As most of the Gold Stars reflect deaths from wars fought long ago, the families within—parents, brothers and sisters, most likely, and spouses, too, I suppose, and their descendants–continue residing in homes decades and generations after the loss of a member who once filled the residence with their personality, energy, and ideas about things. The Gold Stars can’t replace the living presences, but they must stimulate constant remembrance, pride, sadness, obligation, and perhaps anger. That long vigil, signaled publicly but endured mostly privately within the remembering family, seems unimaginable in the amount of grief and sense of loss to which they daily pay witness and render homage. Honestly, I don’t know if I could bear it if I were in the surviving families’ shoes. For Gold Star families, every day is Memorial Day, and so it is for me, a little, too, as I drive about the state.

The story of a local Gold Star family whose son was the first from my state to die in Iraq is told here. Let it represent, respectfully, all other Gold Star families, too. Let’s also remember the local Veterans Homes that have been hit hard by coronavirus. The many veteran-residents taken before their time deserved far better.