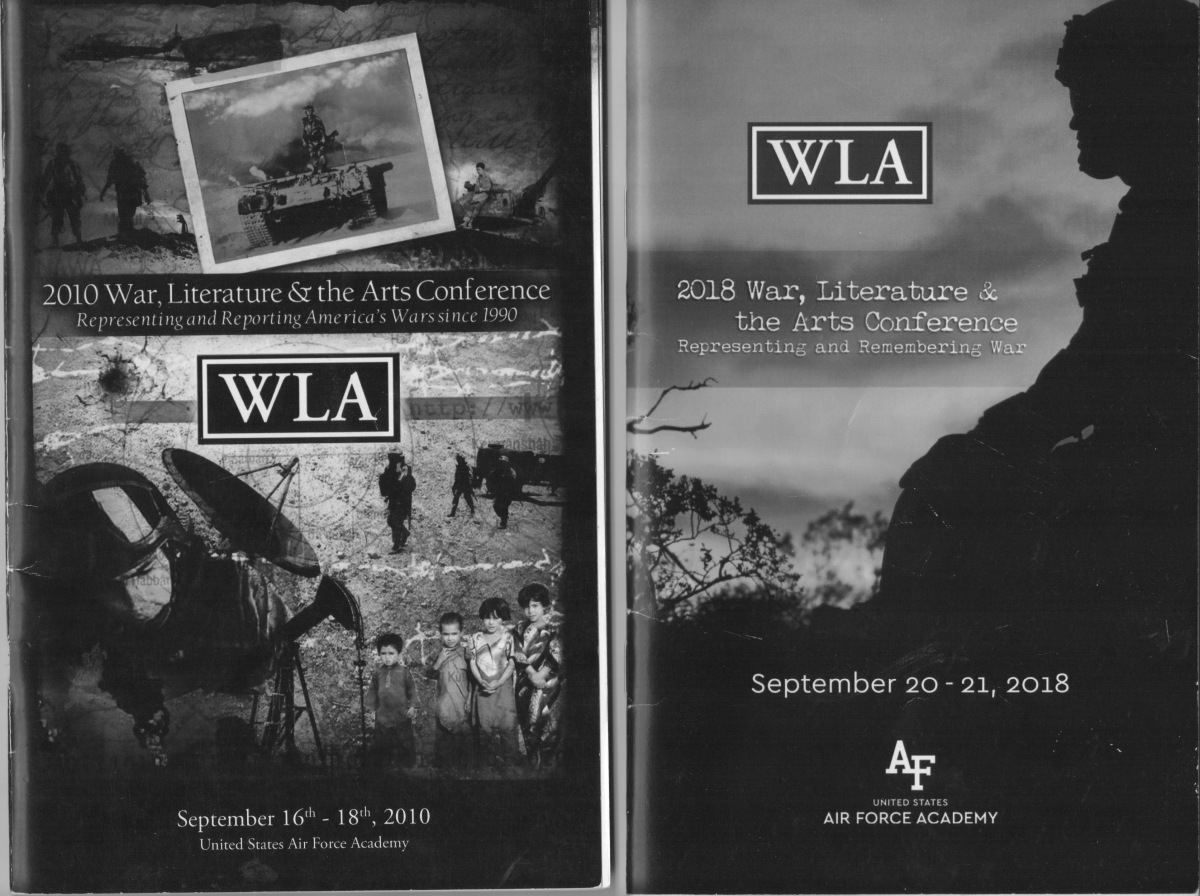 Below are the schedules of presentations taken from the programs for the War, Literature & the Arts (WLA) conferences held at the United States Air Force Academy in 2010 and 2018.

The 2010 WLA conference marked the beginning of a very fertile period in GWOT vet-mil writing. I was lucky enough to attend in those pre-Time Now days. I already knew Brian Turner, but almost every other artist and presenter was new to me. It was all very inspiring; from chance conversations with poets Elyse Fenton and Victor Inzunza on the shuttle-bus from the conference hotel to the Air Force Academy grounds to a great panel featuring Matt Gallagher and Siobhan Fallon, where the idea for Time Now hatched while I was listening to them read, and everything in-between. I don’t think I met Gallagher, Fallon, or Benjamin Busch–one of the featured speakers–at the time, but I was later able to invite all of them to read at West Point, where I taught until 2015.

Looking at the 2010 program now, it’s remarkable how many names are obscure now. The same can’t be said about the 2018 WLA conference; stacked with writers, artists, and academics in the now-robust contemporary war-lit scene, along with selected speakers and readers and scholars from pre-9/11 wars, it was an embarrassment of riches. If you missed so much as a day, you missed a lot, and choice panels competed with each other for attention. And it, too, like the 2010 conference, was enormously generative in terms of sowing the seeds for future writing projects and collaborations.

Read the programs below if you please, and if you have thoughts or questions about any of the presentations, let me know in the comments and we’ll talk it up.

Kudos to the Department of English and Fine Arts at the United States Air Force Academy for sponsoring both conferences. It was very prescient and magnanimous of them to have done so. Colonel Kathleen Harrington, the head of the department in both 2010 and 2018, deserves major thanks, as does Donald Anderson, a member of the faculty, the editor of War, Literature & the Arts, and a fantastic memoirist in his own right. Helping out behind the scenes at the first conference as members of the Department of English and Fine Arts were war-lit mainstays Jesse Goolsby, Jay Moad, and Brandon Lingle, among others.

The current head of the Department of English and Fine Arts is Colonel David Buchanan, the author of Going Scapegoat: Post-9/11 War, Literature, and Culture (2016), one of the few book-length studies of contemporary war-literature out there. Hope he has it in mind to host another WLA conference under his tenure.