Lions for Lambs. I finally caught up with Lions for Lambs, a 2007 film directed by Robert Redford and featuring Redford, Tom Cruise, and Meryl Streep. Thinking about its celebrity cast and the year of its release, it occurred to me that Hollywood, with Generation Kill, The Hurt Locker, and Brothers all released about that time, was far in advance of the nation’s literati or the waves of vet-authors to-come in artistically portraying war in Iraq and Afghanistan. Checking out the reviews of Lions for Lambs as I tuned in, I was surprised how scathing they were. How could a movie starring Cruise as charismatic conservative Senator with a plan to win the war in Afghanistan, Streep as a cynical liberal journalist, and Redford as a well-seasoned college professor go wrong? The performances of the Big Three are good, and surprise surprise the action scenes set in Afghanistan are not bad either, particularly the ones set in a battalion command post and on-board a Chinook flying into battle. But it’s not hard to see what didn’t impress the reviewers. The movie consists of three storylines, each told in spurts, that connect thematically in terms of staging a debate about Army strategy in Afghanistan and the life possibilities of young men with and without privilege, but there’s little intertwining of the three storylines, nor much of a plot at all. Instead, in the scenes featuring Redford and those featuring Cruise and Streep there’s lots of snappy fast-talking dialogue in the manner of The West Wing that resolves nothing on the home-front, and a jimmied-up action sequence in Afghanistan is far-fetched, to put it mildly, and which (spoiler alert) does not end triumphantly for two former students of the Redford character. One review says it best for me by calling it “the movie equivalent of an off-Broadway play” that hopes to be saved by the luminance of its cast. I like The West Wing and off-Broadway plays as much as anyone, but movie-goers, to include this one, might also not unreasonably expect more narrative effort and imagination stitching together disparate storylines than Lions for Lambs delivers.

The military episode in Lions for Lambs involves two soldiers who survive a fall out of a Chinook and the effort to rescue them—much like Brothers, which was released two years later. NYU professor Patrick Deer has written a scholarly article that argues that recovery of “missing bodies” is a dominant motif of Post-9/11 narrative; Deer doesn’t discuss Lions for Lambs, but he might have.

Carthage. I missed Joyce Carol Oates’ novel about a disabled US Army Iraq veteran charged with the murder of his fiancee’s sister when it was first published in 2014. Reading Carthage now, it seems a piece with Roxana Robinson’s Sparta and Cara Hoffman’s Be Safe, I Love You, two other novels written by accomplished civilian authors about troubled veterans and set in New York State (Westchester County for Robinson, Watertown for Hoffman, and for Oates, Carthage, a small town not so far from Watertown) that arrived about the same time. Oates’ protagonist, Brett Kincaid, arrives back in Carthage overburdened with the cultural baggage of the day’s war-veteran discourse: a witness to war-crimes in Iraq, physically wounded and psychologically troubled, he struggles with post-deployment reintegration, an unhelpful VA, and dependency on drink and medication. Unfortunately, the parts of Carthage devoted to telling his story through his eyes per force can’t take flight due to the brain fog and memory loss that envelops him, and in truth Oates’ interest seems not so centered on his struggles but on the reverberations of his actions on the family of his fiancee and especially the fiancee (whom Kincaid may not have killed and who may not even be dead ((spoiler alert)). This too is of a piece with Sparta and Be Safe, I Love You, but to keep my eye on Kincaid, there’s a PhD dissertation that argues that the defining trope for portraying US soldiers in Post-9/11 war-fiction is that of the accused criminal whose guilt must be determined, and the genre of war-fiction in toto should be read as crime procedurals. Carthage was not mentioned in the argument, but it might have been; Oates’ interest in crime-and-punishment is as great as her interest in war and the military, and Carthage invites readers to consider the correspondences.

The Outpost. I was underwhelmed the first time I watched The Outpost, the movie version of Jake Tapper’s book about the climactic battle of COP Keating, in which two US Army soldiers earned Medals of Honor trying to fend-off an attempted Taliban overrun of their camp in Afghanistan in 2009. At first watch, the movie, directed by West Point graduate Rod Lurie, struggled to reconcile two storylines—one about the camp’s leadership woes (two company commanders are killed and another is relieved), and the other about the pre-battle exploits of the two soldiers who would fight so well on the big day. In short, I had trouble sorting out the large cast of soldiers in a way that made their human dimensions in the day-long battle meaningful. After reading Tapper’s book, however, a second viewing of the movie brought everything into much tighter focus. I came to appreciate Lurie’s artistic decisions that streamlined Tapper’s long book, the realistic depiction of soldiering on a remote outpost, and the implicit critique of bigger-Army strategy and performance that undergirds the tribute to the enlisted infantrymen who fought as if their lives depended on it, which they did. Orlando Bloom as Captain Benjamin Keating is the most galvanizing on-screen presence, but he dies early-on. Scott Eastwood as Staff Sergeant Clint Romesha and Caleb Landry Jones as Specialist Ty Carter are both solid as heroes-under-fire, and bonus points (I guess) for casting not just Clint’s son Scott in a major role, but also Alan Alda’s grandson (also) Scott, and Mel Gibson’s son Milo in smaller, but still substantial ones. 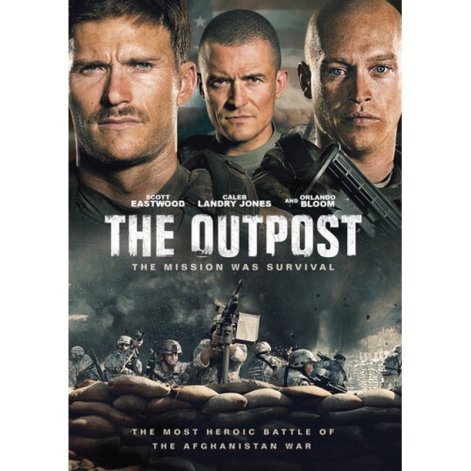 Purple Hearts. Purple Hearts, out this summer on Netflix, is a military romance with an interesting variation on the meet-cute story: a struggling singer, played by Sofia Carson, marries a Marine to obtain health benefits, which includes the expensive insulin she needs for her diabetes. As for the Marine, played by Nicholas Galatzine, he needs a spouse to obtain the additional pay the military provides married soldiers so he can pay off a drug-dealer from the wayward life he left behind when he joined the Corps. Events transpire—the Marine is wounded in combat on deployment—and so too by movie’s end does love, go figure. Purple Hearts is obviously a star-vehicle for Carson, a teen-pop hitmaker IRL, and as such is glamorized, sentimentalized, and sanitized for maximum tear-jerking potential under the direction of Elizabeth Allen Rosenbaum. For all that I liked the fact that Purple Hearts was able to conceive of young male Marines and the women they marry as willing to cheat the system and the way it sheds light on the quickie marriages-of-convenience that are in fact a thing among young military members. Hey, when in (the Army, not the Marines) I knew two officers who married women straight out of strip-clubs and many more enlisted soldiers whose marriages also defied respectability, so good on Purple Hearts for not being afraid to go there, even if by movie’s end it ties a shiny bow on the mercenary start.